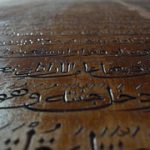 While taking AlMaghrib Institute’s Uloomul Qur’an class (Sciences of the Qur’an) this past January, Shaykh Yasir Qadhi went on one of his famous tangents and began discussing the history of Muslims in China and their struggles. A brother from the audience raised his hand and mentioned how he visited a masjid in China where the Muslims were not allowed to have any written copies of the Qur’an so out of their love and need for this Book, they carved the whole Qur’an on the walls of their masjid, and it is still there to this day.

SubhanAllah, have we ever thanked Allah for the easy access we have to His Book? We can go to our shelf and pick up one of our many copies and read the Qur’an without any problems. Without any worry of being persecuted only for saying: Laa ilaaha il Allah, Muhammad Rasool Allah. May Allah grant victory to our brothers and sisters in China, Ameen.

I was very fascinated by this masjid and I did some research (which means, using the internet =)) to learn more about it. If anyone has any more info, please do share.

This is what I gathered from my search:

It’s called the Great Mosque of Xi’an and it is one of the oldest and largest masajid in China.

This article mentioned : “At the eastern end of the mosque precincts is a broad elevated courtyard, beyond which lies a hall reserved for Muslim prayer. It is roofed with turquoise tiles and upon its walls are 600 wooden boards carved with all the verses of the Qur’an.”

This article gives a really nice description of the masjid: The Great Mosque of Xian is the largest and best preserved of the early mosques of China.

Some pictures are up on Wikipedia here. “Najmudeen” from Flikr has a few close ups of the walls and of the masjid here.

A small tour of the masjid:

A tour in Urdu, anyone care to translate? You can see the pieces of wood throughout the video.

Imam of the masjid hafidhahullah :)

May Allah azza wa jal make the Qur’an an intercessor for those who carved on these walls out of their love for Him and His Book, Ameen.

From Amad:
On quite a different note, Pakistan is turning towards “sufis” to help fight extremism. I am sure many who do consider themselves to be sufi’sh would find this initiative greatly troubling and offensive, because of the “who” [is behind it] and “why” questions. This would be especially true for those who argue for “sufi mujahideen”.

Pakistan announced the creation of a seven-member Sufi Advisory Council (SAC) that is meant to combat the Taliban insurgency by spreading Sufi “thoughts and teachings.”

In this article, Eteraz argues that such a move is destined to fail. Actually, foolish initiatives like this, under the (dis)able leadership of Zardari don’t need much discussion to know that they are foolish. Just some window-dressing to please the RAND-godfathers in the West. Ultimately, the religious practices of everyday Pakistanis isn’t affected by these councils… in fact, whenever certain efforts are supported by the corrupt government, then that is a sign for common Pakistanis to run away from it. Instead of a Sufi Council, Pakistan needs a “Get-rid-of-all-current-politicians-and-start-afresh Council”.