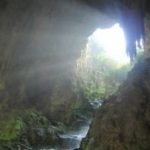 The story of Ashaabul Kahf, the companions of cave from surah Kahf (18), is full of lessons and virtues that we can reflect and act upon.

One such lesson is how Allah ta’ala spreads His Mercy for those who sacrifice for Him.

In ayah 16, the youth say to one another:

“And when you withdraw from them, and that which they worship, except Allah, then seek refuge in the Cave, your Lord will open a way for you from His Mercy and will make easy for you your affair.” (18:16)

In the next two ayaat, we learn how Allah ta’ala spread His mercy for them:

And you would have seen the sun, when it rose, declining to the right from their Cave, and when it set, turning away from them to the left, while they lay in the midst of the Cave. That is of the signs of Allah. He whom Allah guides, is rightly guided; but he whom He sends astray, for him you will find no guiding friend to lead him. (18: 17)

When Ashaabul Kahf went to sleep, the direct light of the sun, nor its heat reached them. When the sun rose, it would rise from the front of them, in such a direction that the sun was rising from their right side. Then when the sun would set, it was not directly on them when they were sleeping but on their left side. So the mouth of the cave was located towards the north or the south, because the sun was on their right side when rising and on their left side when setting. Another meaning of this is that the sun inclined away from the right when it rose so no heat or light reached them, but when it set, some of the light and heat reached them just enough for their sustenance, just enough for them to live and so they would not wake up from the heat or light of the sun.

وَهُمْ فِي فَجْوَةٍ مِّنْهُ–They were in an open space therein. Fajwah means a vast and open space, a gap. They were not in the entrance of the cave, but in the vast openness of the cave, showing that it was not a small cave but a large one that was not constricting, but comfortable and spacious enough to lie down. Allah took care of all of their needs, even their sleeping arrangements.

ذَ‌ٰلِكَ مِنْ آيَاتِ اللَّهِ– ‘That is from the ayaat of Allah!”

Their leaving of the people and going to the cave, the location of the cave, the sun inclining away, the sun not reaching them, the heat not burning them, the open space of the cave, all of this are miraculous signs of Allah’s Qudrah: His Power and Might. This story was not a mere coincidence, they did not just fall upon the cave, randomly found it to be an open space, the sun just happened to not fall upon them when they were sleeping, rather Allah ta’ala made it all happen for them. This is how Allah helps those who stand up for His cause. This is the mercy of Allah in action.

And you would have thought them awake, while they were asleep. And We turned them on their right and on their left sides, and their dog stretching forth his two forelegs at the entrance. Had you looked at them, you would certainly have turned back from them in flight, and would certainly have been filled with awe of them. (18:18)

وَنُقَلِّبُهُمْ ذَاتَ الْيَمِينِ وَذَاتَ الشِّمَالِ- “And We turned them on their right and on their left sides.” They were not lying on their stomachs or backs, because the correct way to sleep is on the right, and they were changing sides, over and over. It is a mercy of Allah to us that we are able to change sides, because if we stay in the same position, our skin would become hard and deteriorate because of the pressure. Even nowadays, nurses are taught to constantly move immobile patients because they can easily develop a bed sore. To add, these youth were sleeping on the ground, and the natural property of sand and soil is that it eats skin so if they were not changing their sides their skins would have deteriorated.

وَكَلْبُهُم بَاسِطٌ ذِرَاعَيْهِ بِالْوَصِيدِ- “And their dog stretching forth his two forelegs at the entrance.” Allah ta’ala also protected them with a guard dog at the front entrance of the cave.

لَوِ اطَّلَعْتَ عَلَيْهِمْ لَوَلَّيْتَ مِنْهُمْ فِرَارًا وَلَمُلِئْتَ مِنْهُمْ رُعْبًا– “Had you looked at them, you would certainly have turned back from them in flight, and would certainly have been filled with awe of them.” اطَّلَعْتَ–ittala’at, means to look down at something while a person is facing it. This shows that the cave was at an angle, so that if one wanted to look in the cave, they would have to ascend. Allah made the cave so that no person would be able to remain there, such as a passerby, because the atmosphere was made that the person would feel fright and feel terror so they would not be able to stay, but rather run in terror.

From these two ayaat, we learn how Allah spread His Mercy for them:

Why did Allah bestow His Mercy upon them? These youth had emaan, they acted on their emaan and they completely relied upon Allah.

The lesson? If you put your emaan first, act on it and completely rely on Allah, Allah will make things happen for you.

If you are sincere to Allah, if you sacrifice for Allah, He ta’ala will facilitate your way, make arrangements for you, and spread His Mercy for you through ways you can never imagine.

Read more tafseer lessons such as this one from suratul Kahf here.

The Effects of Sins: Evil upon Land and Sea