[If you scroll down a bit further there is an image. You will only see what you can see. And as far as I know, all you will see is good. :)

But a lot of people have not been sure what there was to see. For those people, try (1) scrolling up and down a few times quickly, (2) highlighting or dragging the picture with your mouse, or (3) go check the comments quickly and race right back — I’ll wait for you here. ;) (Edited in response to awesome comments.)]

Please take a few moments, and look at the image that follows. 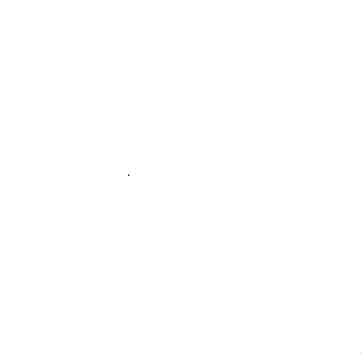 What do you see?

When i went for Hajj, alhamdolillah, I had never met or even heard the shaykh who was our Hajj guide. Most of our group assembled in Abu Dhabi from points all over Canada and America. Alhamdolillah, we met up in a nicely-appointed hotel that had a truly massive conference room. A giant oval table — maybe 15 feet across at its narrowest point, alhamdolillah.

So we are some 50 people sitting around this table. And the shaykh walks in, sits down, and I think he apologized for being late. :)

Then he started talking, and Allah is Witness that I have almost no recollection what he said at the start…

But I distinctly remember the point at which he took a piece of paper out of his backpack, borrowed a pen, and wrote. When he picked up the piece of paper, he held it for all the room to look at it, and he asked “what do you see?” The page looked very much like the image above.

Many people called out their responses.

This is what he said: “if all you see on this page is a black dot, you might as well not go for Hajj.” Alhamdolillah, i did not stop paying attention to him after that! I’m a lawyer: scrutinizing documents and facts for their flaws and idiosyncrasies, either to protect a client by covering the flaw or to exploit an opponent’s error for some advantage to a client — that’s a fair summary of most legal work. I saw both the paper and the dot, alhamdolillah.

But I wanted to know what this shaykh saw.

“This page is clean. It is composed of millions of ‘white dots’.” (In the case of my image, that’s literally true — yes, that is a super-geek-comment, even for me.)

“If all you see on this page is the black dot, or if your eye goes first to the black dot, then you’re in trouble…” (From here I am merely paraphrasing, partly because I’ve heard the shaykh give this example on other occasions, and partly because I’ve recited this example on even more occasions! The shaykh’s advice continued…) …You’re in trouble because everywhere you go during Hajj you will be surrounded by white dots, and all you may see are the few black dots.

You will be surrounded by people in the most important physical journey of their lives, all of them here only to seek the pleasure and Forgiveness of Allah, and you may be complaining that someone left a can on the side of the road.

And Allah is testing each and every person whom He has permitted to come for Hajj. And that can is a test for you. And for millions of other hujjaaj. And some of you will fail because you dwelled on the can, and never noticed the stranger who offered the cold beverage as refreshment for someone who was struggling with the heat.

And when the bus cannot reach its destination, on whichever day that inevitably happens, you may fail because someone comes up to you and complains about the bus driver, and you may join him in his complaint and be lost with him.

And I was afraid because I needed my Hajj to be accepted.

By now, you probably know the shaykh is Muhammad Alshareef. But you should realize that the advice he gave was not just about success in Hajj. Any day that I think about that example in the morning is usually a day when I have appreciated Allah’s generosity to me by evening. And as I offer this post to you, I realize that if I was as worried about the acceptance of my deeds on any given day, as I was worried about the acceptance of my Hajj, then I would be a much better Muslim. So keep praying for me. And be kind to your bus driver.

Related Topics:hajjReflections & Responses
Up Next

Who are you going to call?