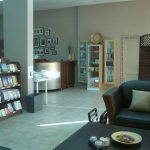 Continuing with last week’s theme of all things book-related, here’s an inspiring story about one sister’s efforts to continue the spread of Islamic knowledge via the written word.

In a land where shopping malls sprawl the horizon, a modest bookshop tucked away in a tree-lined neighbourhood of East Jeddah offers a soothing alternative.

From the outside, Dar Abul-Qasim bookstore and publishing house looks like any one of the tiny store fronts that peek out from beneath dusty buildings, stubbornly withstanding the onslaught of super chains.  But its history speaks to a past, and to a promising future, of offering readers of all faiths with accessible information about Islam in English, as well as in other languages.

Its owner, an American convert to Islam and mother of two, says she has big plans for the shop she took over just two years ago.  Seated on a deep brown couch that contrasts the earthy tones of the store’s walls and bookshelves, Amatullah Bantley enthuses about her vision.

“I’d like to expand it into to being more than just a bookstore; I want it to be a resource centre,” she says, her Saudi-style niqab whisked away from her face, revealing a large smile.  “I want to add a wing that has books available for people to just to come in and read, to research; of course, add Internet access… just to give people knowledge.”

Bantley’s relationship with the company started in 1989, when a friend asked her to deliver a manuscript to the publisher, a Saudi national named Soliman Gasim.  Having opened the business in 1980, Gasim was dedicated to spreading correct information about Islam in English.  So when Bantley brought him the manuscript, with some suggestions on how to make it read better, he told her to go ahead and make the changes herself – and to typeset it, as that had already been completed on the original version.

“What was I to do?” reminisces Bantley.  She didn’t have a computer, a printer, nor any idea on how to typeset.  A friend came to the rescue and found her what she needed – including a computer program that taught her how to prepare text.  Soliman appreciated her work and asked her if she’d like to do more – she hasn’t stopped since.

After 16 years of collaboration, it was the bookstore’s founder who finally had to pull out.

In 2005, deteriorating health impelled Gasim to put the store up for sale, but he wasn’t just after the right price, says Bantley.  “His vision was for this company to be more than just a business.  He always wanted it to be a means of dawah [inviting people to learn about Islam].  He wanted to be sure that whoever he sold it to, would continue with this intention.”

As she watched Gasim turn down offers, Bantley said she couldn’t bear the thought of the company’s demise; she had benefited so much from reading the work they had produced over the years.

“I approached him and told him honestly, I don’t have the money to buy this company but if you can work out some kind of payment plan, I would be more than happy to open the store again… he agreed.”

Bantley, who has a degree in business management, now had to find lenders to back her project.  “There was no other option but to go into debt for it,” she explains.  “From a business sense, people would probably think it was crazy, going on a wing and a prayer, and I just decided it is what I had to do,” she says, the strength of her voice matching the conviction of her words.  “It was very risky [but] for me this is Allah’s project, because He Has opened doors that I could never have imagined.”

Through those doors, community supporters of all backgrounds, both men and women, pitched in to help.  They offered loans, reduced costs on labour and materials, decorating tips – even the framed photographs of Islamic architecture gracing the walls were donated.

This helped Bantley remake the bookstore into a modern, yet comfortable place where readers can leisurely explore the diverse selection of books lining the shelves.  The store sells about one hundred original titles (published by Dar Abul-Qasim), plus over two hundred others from well-known publishers like Darussalam, International Islamic Publishing House and Dar Al-Khair.

And while about ninety per cent of the books are in English, Bantley points to a few shelves featuring books in other languages including French, German, Tamil, Tagalog, Sinhala, Malabari, Russian, Spanish, Indonesian, Turkish and Urdu.  She’s also got thirty translations of the Qur’an in stock.

All she needs now are more customers.

“Honestly, business is a bit slow,” explains Bantley, who says she’s trying to balance the need to pay back lenders with further investing in the company’s promotion and expansion.  “I try to do a little bit of advertising here and there but right now it’s more word of mouth.”

To get people talking, the publishing house hosted a couple of lectures featuring Sheikh Yusuf Estes, the American preacher turned caller-to-Islam in January.  And plans are also underway to promote new and seasoned authors through book signings and readings.  Bantley hopes these efforts – “baby steps,” as she calls them – will help her fulfill the aim of her work:  to produce, provide and distribute top quality Islamic literature  to those who want and need it.

Even Arab businessmen could benefit, suggests Bantley.  “This is an opportunity for them to get [books] locally and at decent prices and they can offer them to their workers.  But they don’t know about us.”

Unless they’re reading this.

Dar Abdul-Qasim is located off of Sahafah Street, on the north side of the Madinah Printing Press. Their phone number is (966-2) 671-4793, or email abulqasimbooks@hotmail.com.  Many of their products can also be ordered online in the United States through islamicbookstore.com and halalco.com 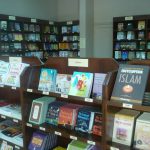 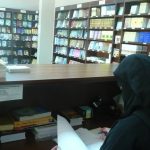 It’s great to have water, electricity, and smooth transportation in our lives. It’s nice and easy to cuddle up in our warm beds at night and sleep peacefully. And it’s just as easy to forget, too rapidly, how some of our fellow human beings are trapped in a city without the blessings that we take for granted – food, water, electricity, medicine, and safety. The holocaust that has torn through the heart of Gaza is the latest, and possibly the most inhuman, blow to the Palestinian people. If we don’t stand up together now, we’re never going to.

Israel gains far more – over ten times more strength through international trade than it does through billions of dollars of US aid. An organized boycott of strategically selected goods will directly hurt the Israeli economy and hence their funding of this genocide. But how many of us can actually boycott everything on these famous lists that swarm the Internet? How many of us actually know where we’re heading with our boycotts? How many are convinced that a boycott will even work?

TogetherAgainstTyranny.com will provide a clear guide to making organized, goal-driven boycotts. It is not going to focus on rumors, isolated boycott events or every product on your grocery list. To get real results, we need realistic goals. We need to track our progress. We need to target brands that will make the greatest difference, depending on where in the world we are. And for every product we boycott, we’d better know why we’re doing it.

Let’s stand up Together Against Tyranny, now.

And meanwhile, in the news:

The Domino’s pizza chain today defended its decision to give the go-ahead for a halal-only outlet which does not offer its customers ham or bacon.

The firm said it had “thought long and hard” about the decision not to offer pork products at its store in Hall Green, Birmingham, which serves an area with a large Muslim population.

Some customers at the store have criticised the new policy, claiming it limits their freedom of choice and discriminates against non-Muslims.

But a spokeswoman for Domino’s stressed that replacement items such as halal pepperoni had been sourced wherever possible.

China has signed an agreement with Saudi Arabia to build a new railway system linking the main sites of the annual Muslim pilgrimage, the Hajj.

The new railway will connect the city of Mecca with the pilgrim destinations of Mina, Arafat and Muzdalifah.  Saudi Arabia also plans to build a high-speed rail link to take pilgrims from Mecca to Medina, Islam’s two holiest cities, in 30 minutes.

The journey time by road can take anywhere between four and five hours.