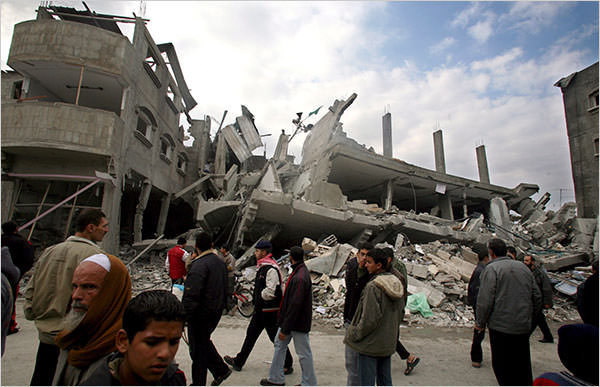 The message the outlawed Zionist state of Israel is sending to the world and international leaders through this barbaric and sadist attack on Gaza is clear: “Do not ever think of reconciling with the Muslim and Arab world. This will never happen on our account.”

With a lot of naïve optimism roaming in America and the international arena for change after the election of Obama, many seriously thought that president-elect is capable as an individual, apart from the system he serves, of bringing change to the world and remedying the damage caused by the previous administration to the US foreign policy. They are still dreaming, and Israel wanted to make sure this dream never comes true.

These vicious attacks can never be justified on any human level. The only justification for this to Israel, is to make sure the relations between the US and the Muslim world of 1.3 billion people, and the Arab world in particular, remains severed. US interests with one fifth of humanity seems to be irrelevant to Israel when it comes to its own interests with the US.

It was that simple and they succeeded. Attack the innocent people in Gaza on a pretext of Hamas control of the area (assuming international tacit approval of ousting Hamas from power). The Muslim and Arab world will be enraged on the public level,  embarrassed on an official level, and will start looking up for the CHANGE the president-elect promised. The US feels (or does not feel) embarrassed, but still supports its so called only democratic ally in the region because it is the beacon of democracy and the free world, and to heck with the rest of the world. (Did I mention that the Palestinian people, even if you do not support their choice, also democratically elected Hamas earlier before the drama started?)

Muslims and Arabs do not see any CHANGE or any justice coming any time soon, even before Obama takes office (read his and his democratic party’s statements again), so they go back to the same camp of disgruntled people. This will ensure that hopes for reconciliation with the Muslim and Arab world do not happen during the term of any president any time soon.

It seems that Israel is seriously in doubt of its own legitimacy after all these years, and any reconciliation between the US and the Muslim and Arab world on this subject will hurt Israel on political and economical levels. It might bring real justice to the Palestinians. Israel is thriving politically on the American Jewish lobbying for its cause and survival, which no American politician dares to criticize without paying hefty political and career damage. In addition, economically, Israel lives off the annual billions of US taxpaying dollars in the form of US aid, long-term loans and evangelical good-well charities. All of this might come to an end if there is no need for an unconditional support to poor state of Israel.

The message is clear: “Do not even think of reconciling with them.” The ties and relations have to remain severed. Message came through, and we are back to square one.

“The Unbelievers spend their wealth to hinder (men) from the path of Allah, and so will they continue to spend; but in the end they will have (only) regrets and sighs; at length they will be overcome: and the Unbelievers will be gathered together to Hell.” Al-Anfaal 8:36