You are now officially a hurricane. 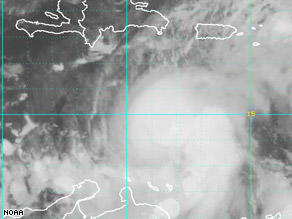 Omar formed Tuesday in the eastern Caribbean and dumped heavy rain on the islands of Aruba, Bonaire and Curacao off the coast of Venezuela. At 11 p.m. ET, its center was about 315 miles (505 km) south-southwest of San Juan, Puerto Rico.

The storm was moving northeast near 6 mph (9 kph).

The storm is generally expected to dump up to 8 inches of rain over some areas, with 12 inches possible in some areas, the hurricane center said.

Some portions of Puerto Rico could get up to 20 inches of rain and the storm could produce life-threatening flash floods and mudslides, according to the forecast.

Also, the storm could produce large swells affecting the west- and south-facing coasts of the Lesser Antilles, of which the Leeward Islands are a part. The swells could cause beach erosion and damage coastal structures, the hurricane center said..

Omar is the 15th named storm of the Atlantic hurricane season, which began June 1 and ends Nov. 30.

An Eid greeting from MuslimMatters.org to all our readers