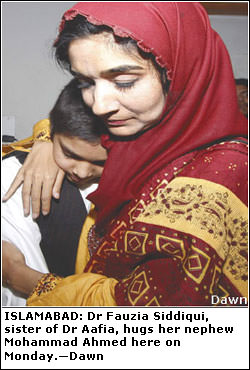 Good news alhamdulilah, as reported on the usually reliable Dawn Newspaper. The burning question now is where are the two other children??

I reiterate what the Human Rights Commission of Pakistan co-chairman Iqbal Haider said that the lack of effort by the American government to do anything for these children, who are US CITIZENS, is a violation of everything that the US stands for, its shameful, hypocritical and antithesis to the fabric of this nation. What is the fault of these poor children? Have they stopped being Americans because their parents ALLEGEDLY did something wrong? This has to be one of the most shameful incidents in American history!

ISLAMABAD, Sept 15: A 12-year-old son of neuroscientist Dr Aafia Siddiqui was handed over to his aunt Fauzia Siddiqui here on Monday after years of detention in a US military base in Afghanistan.

Touching scenes were witnessed when Mohammad Ahmed, wearing white Shalwar Qameez, was brought to Dr Fauzia Siddiqui’s house in Sector F-7/1 amid tight security. He was warmly hugged by his aunt.

According to published reports, Ahmed was only six when he and his mother, a brother and a sister were abducted from Karachi in 2003. Later they were reportedly handed over to US authorities.

“He is traumatised and quite afraid but seems to be in good health,” Dr Fauzia told journalists after the boy had been handed over to her by officials of the interior ministry and intelligence agencies.

She gave a written statement to the officials expressing her gratitude to the nation, President Asif Ali Zardari, Prime Minister Yousuf Raza Gilani, PM’s Adviser on Interior Rehman Malik, Interior Secretary Syed Kamal Shah and the National Assembly and Senate for getting the boy freed.

Dr Fauzia said: “Ahmed is mentally disturbed and so far he has said nothing about what had happened to him in custody.”

She suggested that he should undergo a thorough check-up to determine his health condition.

The boy was handed over by the Afghan government to Pakistani officials in Kabul earlier on Monday.

Pakistan’s Press Counsellor in Afghanistan Naeem Khan told the PTV that Mohammad was in good physical and mental health and “he is OK and fine”.

The boy arrived at the Benazir International Airport in Islamabad from Kabul in a PIA flight and was taken to his aunt’s residence. Security officials did not allowed journalists to talk to him at the airport.

Human Rights Commission of Pakistan co-chairman Iqbal Haider said that the daughter of Dr Aafia was also in Afghanistan. He regretted that despite having US nationality, the US government did nothing for the release of its four citizens. “This is severe violation of the US laws and constitution.”

He said that earlier the US and Afghan governments had denied the presence of Mohammad Ahmed in Afghanistan but some Afghan citizens had informed Dr Fauzia that he was in custody of US troops at the Bagram base.

HRCP Director I.A. Rehman urged the government to get the other two children of Dr Aafia released.

Agencies add: “Under the presidential order of Hamid Karzai, we hand over Ali Hassan to Pakistan authorities,” Afghan Foreign Ministry spokesman Sultan Ahmad Baheen told reporters in Kabul, naming the boy as Ali Hassan and not as Mohammad Ahmed.

“We hope this step should symbolise friendly ties with our neighbouring nation Pakistan,” he said.

Mr Baheen said: “The boy was kept in a guest-house like a guest. He was not a prisoner.”

He said Dr Aafia had adopted the child in 2005 after he lost his parents, a doctor and an engineer, in the 2005 earthquake in Kashmir.

Afghan police said they had arrested Dr Aafia and her son Ali Hassan outside the governor’s office in Ghazni province in July after becoming suspicious of her behaviour.

US soldiers in Afghanistan later took Dr Aafia under their custody after she allegedly grabbed a US warrant officer’s rifle during an interrogation session and fired at them, US officials said.

While Dr Aafia was flown to New York to face federal charges of assault and attempted murder, the boy remained in Afghan custody prompting calls by Pakistan and rights group for his release.

Until her arrest in July, Dr Aafia had been declared as missing by rights groups since she left her parents’ house in Karachi in March 2003.

In 2004, Dr Aafia was identified by the FBI as an “Al Qaeda operative and facilitator who posed a clear and present danger to America.”

She was married to a nephew of Khalid Sheikh Mohammed, the accused mastermind of the Sept 11 attacks. Her husband was captured in 2003 and is now held at the Guantanamo Bay.