I work with Wasat Studios, who from time to time records Islamic lectues and other interesting little videos. At the 2008 45th Annual ISNA Convention, we filmed a tiny short Ramadan Shoutout for AlMaghrib Institute. The video was supposed to be a short reminder sent out to all the students of AlMaghrib to give them a little bit of encouragement for the month of Ramadan.

How it all happened

At ISNA this past year, three AlMaghrib instructors were there invited to speak: Yasir Qadhi, Yaser Birjas, and the latest addition to their line up, Imam Suhaib Webb. With all three of these guys there, we decided, “hey, why not get them together and film a lil’ somethin somethin. Nothing long or formal, but like an informal little fun video.” 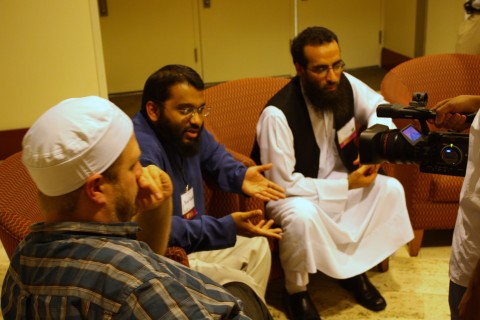 So we asked the two Yasirs after Maghrib salah on Saturday if they’d be down to shoot something after midnight when Imam Suhaib finishses a late night MYNA session, and they said they’ll see how things go. In all honesty, I personally didn’t think it was going to happen. They looked really tired, and trying to get Imam Suhaib to do something after his own midnight session, things were looking grim.

But alhumdulillah, at around 1:30am at the lobby of the Hyatt Regency in Columbus, Ohio, all three of these ṭulāb al-ʻilm came through. And mashaAllah, I really appreciated them for it. When you’re tired from speaking and walking around all day, you really aren’t in the mood for any session besides the entering into your hotel room bed. But just by filming this small little session, inshaAllah it lifted the spirits of the thousands it was sent out to. Just check out the comments.

Kazi Sumon: RAMADAN MUBARAK!! Wow, this is great, jazkAllah hukhair for the upload =] it’s great to see the skeyook all together and leaving a message to benefit us

Sarah: wow jazakallahukhair for posting this with the shoyukh giving us a wonderful message to us youth muslims. Ramadan Mubarak to you ALL!!!;)

Khadjiah: assalamu’alaykum everyone! Wow this is amazing! Jazzak Allaah khayr for the upload. May Allah(SWT) bless us all and protect us from His punishment. Ameen! Ramadan Mubarak!!!

nasreen khan: Assalaamu Alaikum and Ramadaan Kareem to everyone! Jazaakumullah Khairan Jiddan Shuyookhanaa! This is indeed such a beautiful style of wishing Ramadaan Mubarak to us with such crucial reminders. Mashaallah!! May Allah SWT accept our siyaam, our qiyaam, our du’aas and our sadaqaat;, and forgive our sins and overlook our shortcomings. Ameen. May Allah SWT give more success to Al-Maghrib! Ameen.

shuaib mansoori: Assalam-o-alaikum, Thanks to each and every one who has cotributed to this website it is a sourse of great knowledge for i and my family ,i listened to lectures given by our gr8 shaykhs,they are really motivating and inspiring. May Allah grant all og us the taufeeq of making the best use of this ramadaan. AMEEN

I think the message is clear. Sometimes, a little bit of personal touch can go a long way. I pray our mentors, teachers, and instructors will always remember this.

Oh, and it wasn’t our idea to do something on Ramadan. It was completely Imam Suhaib’s.

Before the Ramadan reminders begin with Imam Suhaib, I put together a little bit of an intro, kinda letting everyone know the setting and purpose of the video. I didn’t initially plan for putting that intro together, but after watching just the reminder by itself, I felt that while it was awesome, it was missing something.

So I fell on my backup, extra footage! That’s right, extra erraneous, unimportant, unnecessary footage. Before and after the three instructors spoke, I filmed them for a while. Filmed them hugging, sitting and talking, chillin’ with the brothers, close ups of them, whatever I could manage to shoot. 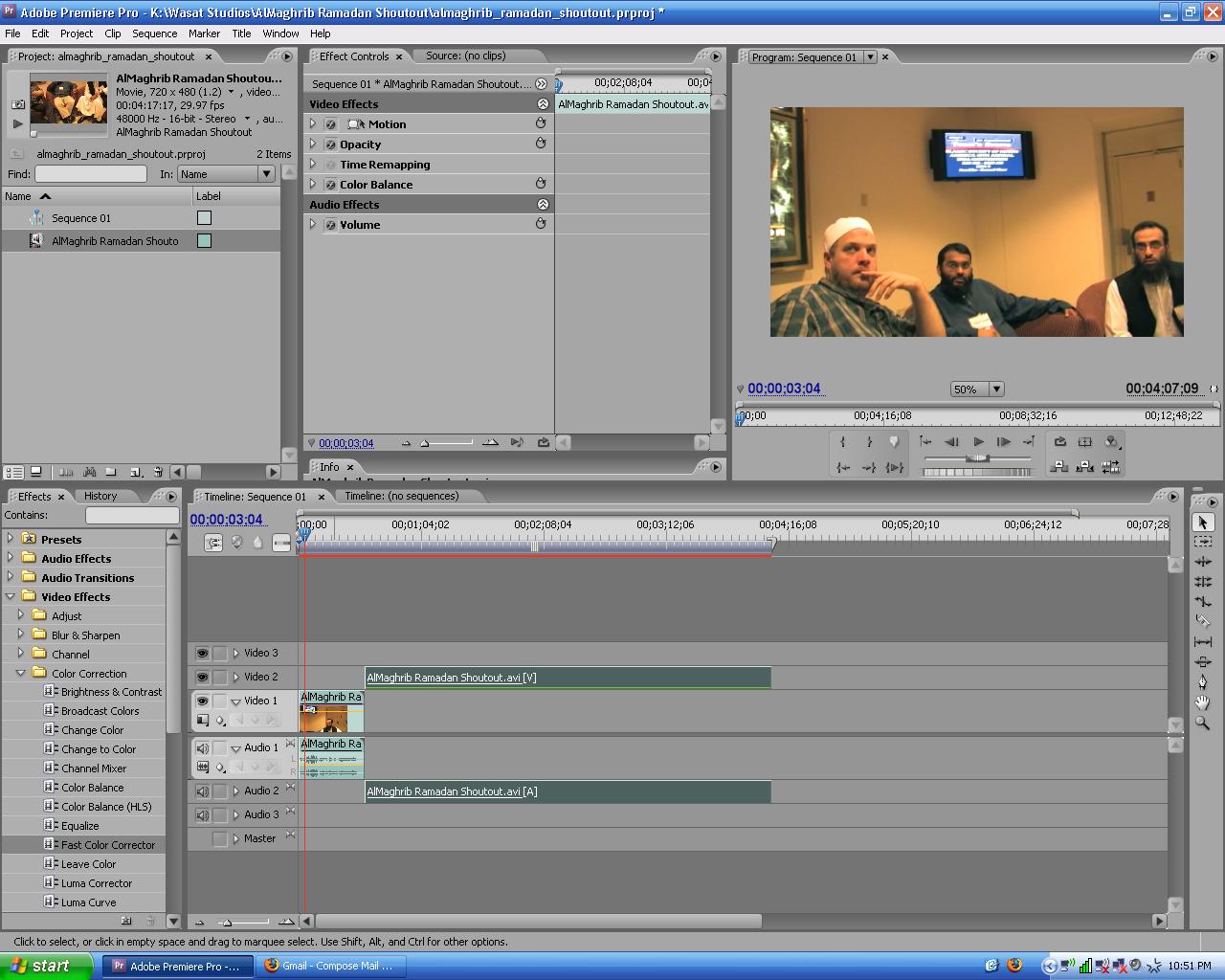 When I shot the extra stuff, I didn’t think I’d use it. But afterwards, alhumdulillah it really came in handy. The intro seemed to give a better perspective of the video and its message, and filming that extra footage was worth it. Lesson to myself and everyone involved in videography: always film extra footage!

Also AlBaraa of leechonfilms who’s the head pioneer in AlMaghrib related videos hooked up the sweet AlMaghrib logo intro that plays in the beginning.

I had three major concerns when it came to this video. The first was sound. We were in the main lobby of an ISNA hotel at 1:30am. So grabbing the audio of these instructors was going to be tricky. If the camera was too far away, it would be hard to hear them. If it was too close, their faces would look all fish-eye lens style.

I had to make sure to adjust my gain levels properly and bump them up if needed while editing. Alhumdulillah the sound came out just fine.

The second concern actually manifested into a problem: white balance. White balance is what the camera does to detect the right colors of the setting. For example, you know how florescent lighting has a more blueish pure white color, outdoor lighting looks great, while indoor home tungsten lighting comes off more orangey? Digital cameras adjust the white balance to make up for the changes in the color of lighting. 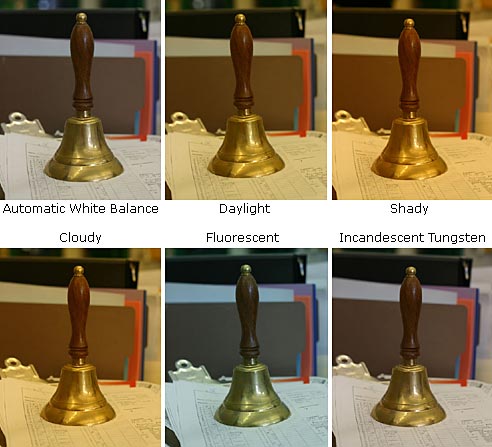 When I film, I try to adjust the white balance before shooting. That way, the colors look more natural and the HD Canon XH-A1’s footage really shines. However, I forgot to adjust for this when I began shooting, so the footage came out abnormally orangeish and “hot”. I was able to tone it down back to what was “natural” in the lobby, but it still didn’t look perfect. Lesson learned, always adjust your white balance!

Lastly, we picked a place to shoot where this poster for the movie “Traitor” was in the background. Shaykh Yasir Qadhi mentioned that we should move, but ended up not doing so cuz of the fast nature of the shoot. 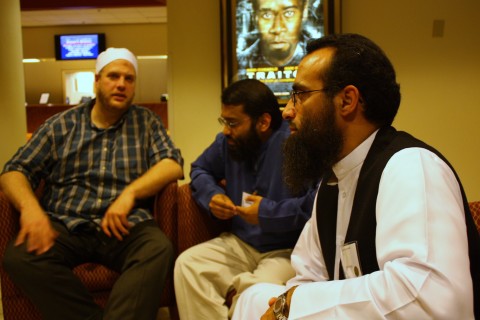 Turns out the movie is supposed to about “Islamic terrorism” or something lame like that. That really stinks! It would’ve been better to not had that kinda film’s poster in the background. Unfortunately, it was too difficult to edit out the poster in the video. Lesson learned, pay attention to your background subjects!

YouTube has this cool new feature called annotations. What you can do is add in notes or speech bubbles into videos at whatever time you like, and control their position, shape, size, duration, all that good stuff. 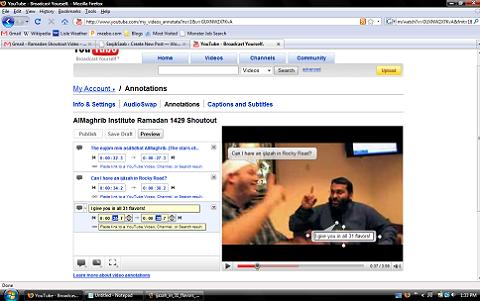 Since some of the audio was a little bit unclear, particularly in the joking around parts, I decided to add them in. It worked out nicely, alhumdulillah. Anyone who watches the YouTube version of this video will see the speech bubbles and know just what goofy things Imam Suhaib and YQ were saying.

Finally, I’d like to say jazakAllah khair and thanks to all those who helped make this video happen. Yeah it was just a four minute video, but sometimes it’s the small things that are big for us in our lives. I’m sure the thousands who will view this video will feel the same way.

So thank you Shaykh Yasir Qadhi, Shaykh Yaser Birjas, and Imam Suhaib Webb for filming this so late. And thanks to all the brothers who helped collect our instructors together, from the people who texted me to meet up, to those who helped make it happen. And a big thank you and shoutout to the AlMaghrib HQ and IlmCast.com crew for taking the video to another level. JazakAllah khair! 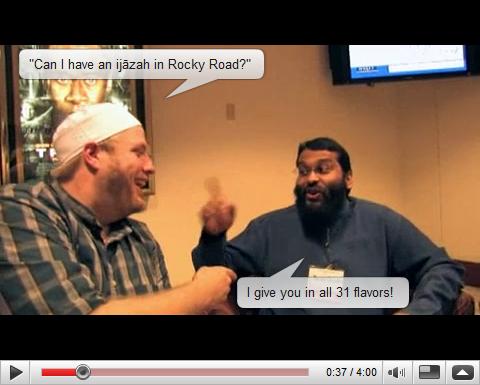