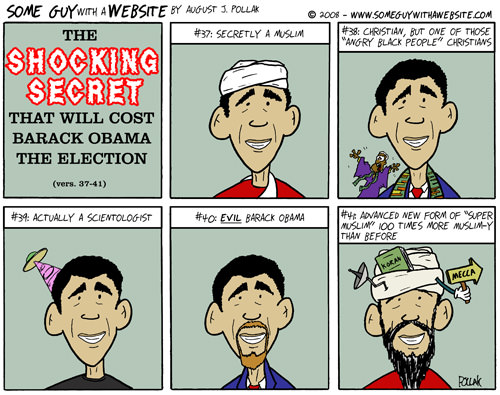 In his New York Times op-ed on May 12, Edward Luttwak puts forth the provocative claim that Barack Obama is considered an apostate by Islamic law. According to Luttwak, Obama will therefore be a liability for American relations with the Muslim world, and he may even face greater risk of assassination than other potential presidents, even those who happen to be right wing warmongers.

Luttwak’s argument borrows heavily from Daniel Pipes, who also attempts to prove that Obama is a former Muslim. Pipes claims that Obama was listed as “Muslim” on some documents from his elementary school in Indonesia and that he was occasionally taken to Friday prayer by his Muslim step-father. In the minds of Luttwak and Pipes, these events, sprinkled throughout what seems to be a very ecumenical childhood, are sufficient to make Obama a former Muslim and current apostate.

The issue of apostasy and execution in Islam, and how it applies to this situation, has been addressed elsewhere, so I will only mention a few points. First, this whole discussion relates to Obama’s religious conduct and identity as a child. Consider this: I have never been a Jew nor have I ever practiced Judaism. Yet when I was a child, my mother took me to a Passover event at a local synagogue. I don’t remember much about it except that she made me eat horseradish, which was a bit traumatic. As far as I know, the synagogue did not make me declare my religion before entering, but if it had done so, my mother would have written “Catholic”. Perhaps then you could say I was a practicing Catholic, unless you ever witnessed me at church, sitting several seats away from my grandfather so he couldn’t tell that I was lip syncing the Nicene creed because I didn’t know the words. Somehow, I think my religious experience as a child is fairly representative, and yet in the case of Obama, it has become a matter of national debate, significant enough to warrant space in the New York Times.

Obama knew Muslims as a child and even had Muslim relatives, through whom he gained some exposure to Islamic practices. OK, but how could any reasonable person conclude that Obama was a “practicing Muslim” and that his eventual embrace of Christianity constitutes apostasy? Normally I would say that Pipes and Luttwak, like all extremists, have an aversion to context and subtleties. But in this case, it’s not even subtle. First, there is the claim that Obama is a former Muslim based on some childhood experiences. Then, it is later argued that Muslims may view him as an apostate, but only if they mimic the same preposterous line of thinking that allowed Pipes and company to declare him a Muslim in the first place.

The fact is that Obama can only be considered a former Muslim in the same way that Pipes and Luttwak can be considered former Muslims. According to Islam, everyone is born with the natural predisposition toward pure monotheism, which the religion then nurtures and cultivates. That is why many of those who embrace Islam call themselves “reverts” rather than “converts.”

As a Muslim, I hope that Obama might accept the pure monotheism that was taught by Moses, Jesus, and Muhammad, peace be upon them. However, if he chooses to exercise the religious freedom that is in fact protected by Islam, then I am still happy to see the good in him and his promises of change. And incidentally, I hope Pipes and Luttwak will return to Islam as well.

Out of the picture: Obama volunteer bars hijabis from photo op – Ruth Nasrullah

Musa Maguire is from Milwaukee, Wisconsin and accepted Islam after graduating from college. In 2004-2005, he received a Fulbright grant to study in Egypt, and then spent the following year working at Huda TV, an English-language Islamic satellite channel that broadcasts from Cairo.