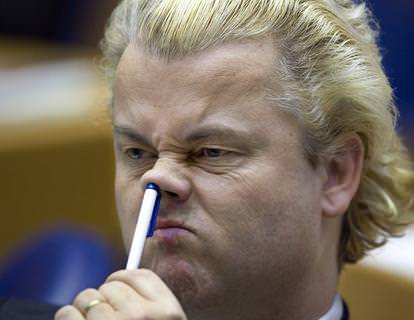 So Geert Wilder’s video Fitna has finally been released onto the internet. And what a reaction there has been.

Network Solutions pulled the site that was supposed to be hosting the film. Techcrunch is worried that Google might experience a “Muslim backlash”. Live Leak, who originally hosted the film, have now pulled it down because of “credible threats”. The Singaporean government has condemned it. The UAE government has condemned it. The Council of Europe has spoken out against it. Afghanistan has expressed concern. Former Malaysian prime minister Mahathir has said Malay Muslims are annoyed by it and is calling for a worldwide boycott of Dutch products. Indonesia has condemned it. The OIC naturally condemns it too.

That’s a lot of government and official condemnation for a 17 minute film on Youtube. However, rather than the riots and rivers of blood that the pre-release marketing led us to believe would be the natural consequence of Wilder’s little film, the response from actual Muslims has been, well, not much of a response at all.

As far as such things go, Wilder’s film is quite a weak effort. It’s unlikely to provoke anyone to anything except, perhaps, fall asleep or yawn. Wilders has simply taken various photos and videos of Muslims doing or saying bad or outrageous things (that already exist on the internet at places like MEMRI anyway), thrown in some headlines from Dutch papers, some verses from the Qu’ran, some statistics on Muslim immigration and population growth, and finally added some spooky-sounding music to give, I suppose, gravitas to the whole thing.

The thing that strikes me more than its offensiveness is its lack of originality. Wilders, apparently unable to come up with a suitably offensive shtick of his own, attempts to ride on the coattails of the Danish cartoons; appropriating one of their cartoons — without permission — and using that to start and close his video. He’s now being sued for that. He used footage from an interview with Theo van Gogh without permission. And the owner of that footage is considering legal action too. Where he was original — perhaps too original — was in using the photo of a Dutch-Moroccan rapper instead of a terrorist. He’s now being threatened with legal action for that. Fitna is proving to be more of a fitna for Mr Wilders than for anyone else.

And, as for the content, then, of course, Muslims have done some terrible things in the past and the threat of terrorism is very real and must be confronted by Muslims and non-Muslims alike. However, Wilders’ message isn’t directed at that minority of Muslims who carry out or threaten terrorist attacks but at all Muslims: he views all Muslims as being the “problem”. By doing so, he is intentionally seeking to smear the vast majority of Muslims who find terrorism and violence every bit as abhorrent as the average European non-Muslim; and have, contrary to what some people like to allege, been condemning terrorism every time it has occurred. This is completely counter-productive.

In his comments on Andrew Bolt’s blog, Shibli Zaman makes this point very eloquently and points out the fact that, despite having a large number of Muslims, the United States does not have any issues whatsoever with its domestic Muslim population; which suggests that whatever challenges Europe may face are not the result of the religiousness of their Muslim population but other factors (most notably the welfare state and rigid labour market policies that keep new entrants excluded and therefore alienated). Interestingly, although some of these European “liberals” are very happy demanding that Muslims liberalise their social attitudes, they rarely seem interested in economic liberalisation and making the necessary adjustments that would have a far more appreciable effect than heckling and complaining.

Wilders is not immune to this curious hypocrisy. On the one hand, he and his supporters have rejected the wrongheaded calls for Fitna to be banned; arguing, quite rightly, that freedom of speech and expression must be protected (even if that speech offends some members of society). And yet, on the other hand, a key component of Wilder’s “final solution” to the European Muslim question, is to ban the Qu’ran because he doesn’t like its content.

(This is cross-posted from Austrolabe)

How Muslims are Treated in the USA – ABC Primetime