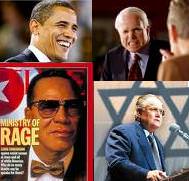 Help me out here. I am confused. Two stories, very similar in basic facts, yet with highly different consequences.

Mr. Hagee enthusiastically endorsed McCain: “Victory is within our grasp because John McCain knows it’s never wrong to do the right thing,”

And how did the candidates respond and what was the consequence?

Let’s start with Bigot#1, Farrakhan, who makes no secret of his dislike for whites and Jews? (as a point of education, please note that his ministry called “nation of Islam” has nothing to do with Islam, considering that it believes that a black man in Africa was God-incarnate and an African-American man was really Mohammed the messenger of God):

“I have to say I don’t see a difference between denouncing and rejecting. There’s no formal offer of help from Minister Farrakhan that would involve me rejecting it. But if the word ‘reject’ Senator Clinton feels is stronger than the word ‘denounce,’ then I’m happy to concede the point, and I would reject and denounce.”

He wants nothing to do with Farrakhan. Yet, somehow, he is GUILTY of being praised by someone he has no control over? I mean, god forbid, if Bin Laden endorses me for president, is that suddenly my fault and reflects on me? But of course FOX Noise cannot hide its glee. The Noise thinks it has found an opening. Somehow it links this to the support of Israel and makes Obama look the weaker candidate for Israel (as if we are electing the President of Israel).

Why would Farrakhan support Obama over McCain? Remember Farrakhan’s movement, the Nation of Islam, was founded and is still mostly about black nationalism. There is very little religion in it. So, a black candidate would be a natural choice for someone with that sort of motivation.

When Bigot#2, John Hagee, supports McCain, what is McCain’s response?

“I’m very honored by Pastor John Hagee’s endorsement today,” McCain said at a news conference. “He has been the staunchest leader of our Christian evangelical movement in many areas, but especially, most especially, his close ties and advocacy for the freedom and independence of the state of Israel.”

In his book “Jerusalem Countdown: A Warning to the World,” Hagee predicts Russian and Arab armies will invade Israel and be destroyed by God. Israel will then be the site of a battle between China and the West, which will be led by the anti-Christ in his role as head of the European Union. Jesus Christ will return to Earth in the final battle, he writes.

The book also claims Adolph Hitler and the Roman Catholic Church joined in a conspiracy to destroy the Jews.

Hagee has consistently railed against Muslims and against Islam’s Prophet. A quick google search will lead to many to of his bigoted statements. A dailykos reader, where I cross-posted this, mentioned that Hagee has also stated that Muslims have a “scriptural mandate to kill Christians and Jews” and that God caused Hurricane Katrina to hit New Orleans because the city was going to have a gay pride parade. Glenn Greenwald has a fantastic column on this media hypocrisy, which makes most of the same points in this post.

So, it is okay to be an anti-Muslim, anti-Catholic bigot, but not an anti-semitic bigot? And why is it that the 300 pound gorilla on the Capital hill, THE Lobby, AIPAC, actively cheers and supports Bigot#2, but cries foul when Bigot#1 says anything?

Why is it that an unquestionable, uncritical, lopsided approach to Israel somehow a criteria of who would make a better President for the United States of America? Now note that neither candidate has displayed any characteristic but unquestionable, uncritical and lopsided support of Israel. All we are talking about here is a little whiff of SEMBLANCE of difference, caused by a person whose support has been rejected by the candidate. Could there be a more powerful reminder of how powerful THE lobby has become? And how its surrogates in the media make stories out of nothing in order to continually impress upon the candidates that they must be loyal to THE cause otherwise they will be punished? (If you don’t believe me, see this video).

Double-standards? Machiavellian right-wingers? THE Lobby’s influence? you be the judge.

So, you see why I am confused, don’t you?