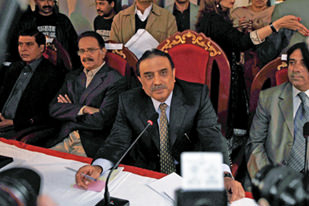 Although Pakistan waits with bated breath for the final results of the election the results so far show a resounding victory for PPP and Nawaz Sharif with a crushing defeat for the dear General. Can’t say that the general didn’t ask for this but how true is what we see and how false is what we are made to believe? Yes the notions of democracy are very appealing to the people who feel that holding these elections will free them from the clutches of the tyranny of the general who in turn has been nothing but a puppet of the US. That is exactly the reason why the public hates him so much. But the public also needs to realize that any third world country, Pakistan included can only be as democratic as the superpower wants it to be. They do what America wants because that is the rule of the game. The only reason why Benazir had returned was because there had been a deal with the US that if elected to power she will cooperate with them, and there were already insinuation of this cooperation in her speeches after her arrival in Pakistan. Though Benazir is out of the picture but the PPP has still won, with tons of votes the votes of ‘sympathy’. Ironically, her death did serve her party well.

The next step in all probability should be that PPP and Nawaz form a coalition but somehow that is not too likely for the primary reason that Nawaz made the reinstatement of the judiciary one of the conditions for such a coalition so that Musharaff can be gotten rid of. Nawaz is also not as keen for an all out US presence in Pakistan for weeding out Bin Laden and his pals as is the PPP and hence his coalition with PPP will only lead to friction between the two parties rather than any smooth accord that the public imagines will ensue. Therefore it should come as no surprise to anyone if the PPP refuses to join hands with Nawaz and agrees to let Musharaff, perhaps with much diminished power, still stay on. That is what the US would want and more often than not, what the US wants, the US gets.

So how important really is a ‘democratic’ Pakistan to the US? Democracy in Pakistan is not of a concern to the US as it does not affect its mission of rooting out Al-Qaeda and Taliban operatives from in and around the region. Democracy is good for the US only in the sense that a democratically elected presence will be a moderate one and hence more inclined to support the US on Pakistani soil. Plus the US will also look good with a democratic nation as its ally. Other than that, the notion of a democracy will be nothing but a fool’s paradise for the poor Pakistanis who are in for a big jolt if they think democracy will help them at all. True that Benazir was the person of choice but now that she isn’t’ here, the US shouldn’t really have any problems making do with Zardari. It really won’t keep them from pursuing their actual interests, or Bin Laden, at all.

Charles Krauthammer presents a very clear US objective in his article, ‘What is America to Do about Pakistan?’, ‘Pakistan is not the first time we’ve faced hard choices about democratization. At the height of the Cold War, particularly in the immediate post-Vietnam era of American weakness, we supported dictators Augusto Pinochet in Chile and Ferdinand Marcos in the Philippines. The logic was simple: The available and likely alternative—i.e., communists—would be worse’. It won’t be surprising if the US applies the same formula to Pakistan. Democratically held elections are a good idea to pacify the public and make self look good to the rest of the world—who cares beyond that as it will not deter the actual plan of action anyway.

Is the US really ‘fooling’ Pakistan by ‘pretending’ to support Democracy? Happens all the time as part of US Foreign Policy. The world doesn’t really need to know anything about the real deals that transpire behind the curtains. Krauthammer further writes in the same article, ‘Universal democratization is lovely but it cannot be a description of day-to-day diplomacy. The blanket promise of always opposing dictatorship is inherently impossible to keep. It always requires considerations of local conditions and strategic necessity’. So what is the necessity in our case? To make sure a moderate stays in the seat who will support and cooperate with the US whenever it feels like extending its feet further into Pakistan. Democracy looks good on paper but cannot be abided by in every situation and let’s face it, if there is one extraordinary political situation in the world right now, it is Pakistan. It can be seen as ample proof of America’s hypocrisy in defending freedom and outwardly supporting democracy but do we have a choice? Heads we lose, tails we lose…….