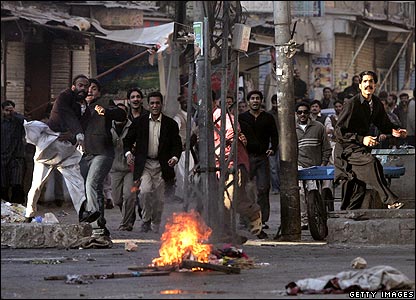 The severe unrest that is gripping Pakistan in the aftermath of Benazir Bhutto’s assassination and the chaotic, near anarchic ways in which hundreds and thousands of her supporters are reacting is a sad reminder of how far the rural poor class is from religion and its teachings. She declared herself ‘leader of the poor’ who vowed to ‘live and die with the poor’. It is no surprise that the majority of her supporters were the poverty stricken villagers. Without exaggeration, one third of the 165 million of the country live below the poverty line.

The society is divided into three main groups, urban, semi-urban and villagers. But there are only 10 to 15 cities that can be called urban and more than 70 percent of the total population lives in the villages. Despite the division of the society into three major classes given the state of mentality of the poor in Pakistan it won’t be wrong to say that they are in a class by themselves. Pakistan does indeed have a fourth social class in the form of its villagers who are not only poor and uneducated but they are so far from religion that its ramifications can be witnessed in their violent outburst displayed in the aftermath of Benazir’s assassination that has gripped the entire nation. No doubt there are others who have jumped this emotional bandwagon to further their own interests, but the majority of the raving and grieving do constitute Bhutto’s passionate and loyal followers.

In a country where 30 to 35 percent of the population lives on one dollar a day (World Bank), there needs to be sustenance of the soul and a hope for the future. And this hope is given to them by the landowners whose land they till and by the mighty promises of the politicians who promise them glorious futures. That is the end of their hope. I am not saying that these people are not Muslims. No doubt they are but there is more to being a Muslim than just being called one. I absolutely do not think they would have reacted in this rash manner had they been closer to Allah. I absolutely do not believe they would damage, burn and ransack their own country as they are doing right now had they been closer to His and our Prophet’s (pbuh) teachings. I absolutely do not think that they would have adopted this manner of reacting to a death and mourn it had they been aware of what Islam prescribes for the manner of mourning. Yes the people are hurt and yes they are grieving. But death is imminent. Husbands die leaving behind uncared for families. Parents die leaving orphan children behind. These villagers know death and misery far closer up than any of the other classes and yet they take to the streets like wild men at the death of Benazir. The reason is obvious. This class gives their politicians the stature of a God and with Benazir gone, her followers are lost. They are directionless just as people say they feel directionless without the presence of religion in their life.

The allegiance of the villagers to political figures and their reverence for them in their lives is a social stigma exclusive to this fourth class and continues down from one generation to the next. These 70 percent of the villagers are not considered in any policy other than for producing food. There are poor people and even entire families at a time who attempt suicide just to get away from life and end their destitution. Majority of the villagers live a wretched life in poverty, lack of health facilities, illiteracy and unemployment and no faith. To me their biggest issue is lack of faith, lack of iman and total ignorance of religion. In these circumstances even if you and I were to go there and promise them a glorious future, they would start bowing to us. It is sad but it is true. The lack of faith is the actual tragedy of this fourth religion-less class.

Sadly and worse still, it is this same lack of faith that has made them sitting targets for exploitation from politicians who have everything to gain, in the form of their votes, and nothing to lose. Who has ever kept their promise once they came to power? If these promises had been kept, the situation of the Pakistani poor wouldn’t be as dilapidated and shoddy as it is now. They believe their political ‘gods’ and they follow them blindly. And when their God is destroyed they are willing to turn the entire country upside down to express their grief and rage.

Sociologically, what Pakistan is witnessing today is a classic and complete state of anomie as outlined by Durkheim. According to his theory, anomie is a state of being where social norms are unclear or not present. It is a general state of lawlessness where the people have no clear rules to guide them. They cannot find their place in society and the result is conflict and deviant behavior. As the rules governing society break down as a result of this unrest there is further crime and violence. In the case of the villagers in the Pakistan, they are bonded mentally to their landowners or to political figures who have promised them a better life. When these figures disappear or suffer in any way, they lose their sense of belonging and hence react as they are reacting right now. This phase of allegiance to human gods and this cycle of violence and mayhem will continue and the entire country will suffer unless this mode of thinking is reprogrammed. The best way this can be achieved is if these human gods come down from their high, golden zeniths, look these poverty stricken in the eye and tell them they too are only ordinary people who can only do as much as they are humanly capable of doing. These needy and poor need to turn to Allah as only He has the power to deliver them from pain and suffering.

The distance from religion can create havoc not only in the entire society but also in the person’s everyday life. There is no purpose in life and the only important figures are the ones who are holding their reins and promising them a better life. How these people behave in the public and how they are expressing their anger and grief at the moment is only the tip of the ice-berg. How this distance from religion has wrecked havoc in their personal dealings and how it particularly devastates the lives of their women is a whole different story. If iman is infused in a person’s heart, it will gradually not only change his dealings with the members of his household but also change his outlook on how he views his relationship with the rest of society.

I guess it is an extravagant dream but dreams do have a way to become realities. I can only pray that this one is one of those dreams. These people may not have money but if they could only have iman, that will be enough wealth for them.

A VIP Ticket To Jannah In 10 Steps: Lessons From Surah Al-Furqan