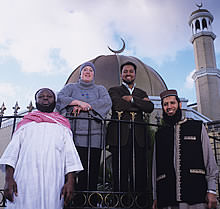 Having spent an hour this evening repeatedly smacking my hand against my forehead whilst watching a documentary on some random American Doomsday cult, I found the same hand twitching slightly when, straight afterwards, I witnessed an advert for an upcoming Channel 4 production called: Make Me A Muslim. What is it with Channel 4 and quirky shows about religion? They obviously know what draws the punters in.

Here are a few details I found about the show on the C4 microsite, and in a Guardian article published in November:

Can Islam help repair the moral fabric of British society? To test it out, Imam Ajmal Masroor asks six non-Muslims and one lapsed Muslim to follow Islamic teachings for three weeks. The six come from Harrogate, in Yorkshire, a town with very few ethnic minority inhabitants. [Channel 4]

Among the characters who explore the religion are a mixed race couple, one of whom is a lapsed Muslim, a gay hairdresser, an atheist taxi driver with a porn habit, and a glamour model who enjoys flashing on her nights out. Helping them are Muslim mentors guiding them in the dos and don’ts of the religion. Broadly speaking, these include a ban on pork products, alcohol, immodest outfits, sex outside marriage and homosexuality… [The producer, Narinder] Minhas says he was tired of watching “po-faced” programmes about Islam and, always on the hunt for hybrids, wanted to turn religion into factual entertainment. [The Guardian]

I will start with optimism, which was a trait loved by our Prophet Muhammad (peace be upon him): even with the wacky premise, I am sure there are many positive aspects to such programming for Muslims in Britain; as I mentioned in an earlier entry, when it comes to Muslims in the media, all news should be treated as good news. In addition, it bodes well for the image of Islam that a real imam (who I will automatically assume is the kind that we would all be proud to have in our local masjid, insha’Allah) is involved in this particular production.

Doesn’t this all seem a tad superficial, and even… tacky? To herd together a bunch of people who would clearly have issues with the stance that Islam takes on certain aspects of their personal lives (as if Islam is the only moral authority that looks down on pornography, homosexuality and glamour modelling), and force them to live like Muslims for three weeks – that’s just asking for trouble. But trouble is the magic ingredient that leads to higher viewer ratings, greater profits from advertising revenues, and more attention for the producers and broadcasters (yes, the irony of this entry does sting a little, if you’re wondering).

Besides, Islam is not about the praying, and the fasting, and the general abstinence from harmful activities, such as drinking, gambling and adultery. It is not about the hijab. Islam is not about the Shariah. These are simply the things we should or should not do as Muslims. Islam is the belief in the oneness of God, and that Muhammad (peace be upon him) is the messenger of God. It involves our acceptance of God’s status over us, and recognition of our obligations to Him. These obligations do include the acts of worship, and the regulation of our behaviour – but they are firmly rooted in the faith we have in the oneness of God: Tawheed. Without Tawheed, we are not Muslims. We may be “good people” in the eyes of others because of our morals and manners – but not Muslims.

Wrt the position of the Shariah in Islam, I am reminded of the words of the Prophet’s beloved wife, Ayesha (may Allah be pleased with her), when describing the order in which the Qur’an was revealed:

“(Be informed) that the first thing that was revealed thereof was a Sura from Al-Mufassal, and in it was mentioned Paradise and the Fire. When the people embraced Islam, the Verses regarding legal and illegal things were revealed. If the first thing to be revealed was: ‘Do not drink alcoholic drinks’ people would have said, ‘We will never leave alcoholic drinks,’ and if there had been revealed, ‘Do not commit illegal sexual intercourse, ‘they would have said, ‘We will never give up illegal sexual intercourse.'” [Al-Bukhari]

I love this narration because it clearly illustrates the wisdom that Ayesha was blessed with. She realised that although the Shariah is an important aspect of Islam, it is not the be all and end all, and that taken alone, it can even be quite off-putting to those who do not have a firm foundation in the faith; the foundation that is built on the love of Allah, hope for His reward, and fear of His punishment.

Of course, for those Muslims who already have this foundation, the Shariah must be respected and upheld. But I wonder whether forcing six non-Muslims (and one “lapsed” Muslim) to observe the practices of “devout” Muslims will bring them any closer to Islam, or will it push them even further away? Especially considering the “colourful” profiles of the panel of volunteers they have gathered. And what about the viewers? The programme may help them to understand the Islamic way of life, but I fear it will be more of an exercise in cultural acceptance, rather than a journey towards seeking the truth. It all depends on how well Islam is explained by the “mentors”; you cannot expect anyone to change their way of life overnight – or even in three weeks – if their hearts have not been moved by the message of Islam.

Saying all this, it is obvious from the Guardian article that the intent of the producers was not Dawah in the strictest sense, but rather “factual entertainment”. Even so, I am still confident that it will serve this purpose on some level, even if it be by simply encouraging more water-cooler talk on the topic of Islam; thus, it is important not to get too side-tracked by the exact content and format of such shows, but rather, to see them as potential ice-breakers to help us spread the real message of Islam to the people around us, insha’Allah.

For this reason alone, even with my early reservations, I would actually suggest that we encourage our non-Muslim acquaintances to tune into Channel 4 with us this Sunday evening at 8pm – just be prepared to do a lot of explaining afterwards – but that’s the fun part!

Update: Read my complete review of “Make Me A Muslim”.