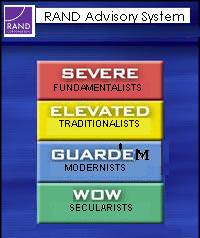 Drum-roll please… the new RAND Report is out… they love publicity, and we the Muslims have to unfortunately keep giving… we cannot put blinders on and ignore brother RAND. So, I have a few RANDom thoughts…

Interestingly, I had a several more paragraphs that completely disappeared in thin air after I finished posting… seems like RANDom bugs have hit this endeavor. Well, I’ll consider adding more later as time permits, and will have a UPDATE sign in the title. Until then, enjoy Umm Zaid’s thoughts here, and Jinnzaman’s intellectual response, snippets of which I have pasted below:

“Remember how the Unbelievers plotted against thee, to keep thee in bonds, or slay thee, or get thee out (of thy home). They plot and plan, and Allah too plans; but the best of planners is Allah.” ( al-Anfal- 30)

The RAND corporation, author of the infamous “Civil Democratic Islam” paper that essentially laid forth a “divide and conquer” strategy to subdue the Muslim world from resisting American hegemony, recently released a follow up report entitled “Building Moderate Muslim Networks” to effectuate the policy objectives that were previously discussed in their other papers. The report comes in the wake of a recent summit by “secular” Muslims in St. Petersburg, Florida where they issued a proclamation declaring support for secularism, “human rights”, along with condemnation of orthodoxy, the Shari’ah with particular focus on the hadd punishments against apostasy, zina, Islamic governance, not to mention practices that have no place in Islam such as female circumcision, honor killing, forced veiling, and forced marriage. Unsurprisingly, the doctrine such “secular” Muslims espouse and the method they utilize to propagate their ideas coincides exactly with the doctrine and methods espoused in the “Building Moderate Muslim Networks” paper. Some may describe the secular Muslim summit and the publication of the report as a fortuitous coincidence, while others may describe them as merely the convergence of plans that were long in the making.

The underlying argument of this paper is that the is currently embroiled in what is described as a civil war within Islam whose outcome is on par with the titanic struggle that occurred during the Cold War with the . Just like the utilized both covert and overt tactics to contest the expansion of communism, it must utilize both covert and overt tactics to subdue “radical” Islam. The paper specifically focuses on the concept of developing “moderate” networks to contest the authority of ‘s opponents both at home and abroad. [MORE]

The paper is wracked with ambiguous definitions, weak inferences, and downright ignorance of the subtleties of the region as a whole. Although I am not quite certain how the paper has been received by strategists within the government, if this paper is the primary source of covert policy in subduing “radical” Islam, then the US is in for a world of trouble because such a program is bound to fail. In addition to the general problems of the normative and descriptive value of the paper, I have five specific criticisms of the article. [MORE]

Challenging the Hegemonic Discourse on Islamism

What the paper has made clear, along with other papers on Islam, is that Western countries do not seek to eliminate those Muslims who utilize violence against innocent civilians, but those Muslims who seek to challenge Western hegemony as well, regardless if they use entirely peaceful and legal means to fulfill these objectives. If this is true, than the “War on Terrorism” must be changed to the “War on Islam Itself.” Some Muslims may contest such a claim. Some Muslims, wasting away in luxury and conceit, ignorant of Islamic traditions and history, naïve of global politics, go so far as to deny that the West is an existential threat to Islam. What these ignoramuses fail to realize is that war is already upon the Muslim Ummah. The threat of bombs falling on our cities, our women being raped, our men being shipped off to prisons for no crimes and being tortured in inhumane ways, is not merely a potential future outcome, it is already here. The future is now. [MORE]

Intellectual Revolution: The Only Solution