Matthew Smith, also known as Yusuf,  is a veteran U.K based blogger. He blogs at Indigo Jo Blogs- Blogistan where this article was first posted.

Last week a number of newspapers ran with prominent stories that supermarkets and restaurant chains were using halal meat, or had been doing so without their customers’ knowledge for some time. This is actually not news as a number of supermarkets have been doing this for years, chiefly because New Zealand abbatoirs employ Muslim slaughtermen so that the lamb they produce can be supplied to the Middle East.

The media have been mixing the issue of the meat being halal with it being from animals that were not stunned before slaughter (which in fact is the case with only a minority of halal meat in the UK). It is the first time the story has made the front page of a national tabloid, however. 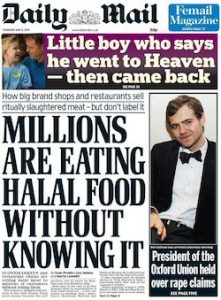 Halal Meat in the UK

There are two types of halal meat in the UK: there is “HMC halal”, which is unstunned, and there is everything else, which is stunned. The Halal Monitoring Committee is run, I believe, by scholars of the Deobandi school, which has a strict policy that the animal should not be stunned as this would render it an injured animal (and unfit to be slaughtered) and some forms of stunning may actually kill the animal, which would mean it died unslaughtered (and is therefore unlawful to eat).

The HMC insist on animals being slaughtered in the way they always were before stunning was invented relatively recently, and as it still is in most of the Muslim world. Other slaughter monitoring agencies do not follow this position, although the majority of restaurants which claim to use halal meat do not even state who monitors the abbatoir or qualified the slaughter-man; however, many Muslims prefer HMC meat because suppliers as well as abbatoirs are monitored, so there is much less chance of the meat being mixed up with anything else.

Note to Sun: Kosher unstunned too

Muslims are not the only religious group that insists on slaughtering without stunning, of course: Jews do as well, and all the kosher monitoring groups (to my knowledge, there is one connected with the Chief Rabbi’s office and another which serves the Haredi communities who mainly live in the Stamford Hill area of north London). While the controversy about non-stun slaughter affects them as well, and those who wish to ban non-stun halal slaughter also want to ban kosher slaughter, it is hard to imagine that the Sun would make it front-page news if a restaurant chain had been using kosher meat without telling its customers.

Of course, there is no economic imperative to do so, since the dietary rules in Judaism are much stricter than those in Islam (for example, there is no requirement to separate milk and meat products in Islam, and more types of meat are permissible in Islam, such as rabbit), so the use of halal meat would gain them many more customers than the use of kosher.

To make a front-page story of it, implying that customers were being “tricked” into eating something they otherwise would not have done for the sake of Jews, would obviously open the Sun up to charges of anti-Semitism, and in any case, the paper’s well-known Zionist sympathies would preclude this.

They did this because they could get away with it.

The use of halal chicken on its own does not make all the food a company sells halal. There has to be no haram (forbidden) ingredients; in particular, if food is cooked with an alcoholic drink, it becomes haram (most, but not all, Muslim authorities permit trace amounts of chemical alcohol, as found in food flavorings).

There must also be no danger of cross-contamination, and the danger in a kitchen where non-halal meat, particularly pork, is cooked is enormous. In the particular case of pizzas, many Muslims would regard cheese made with calf rennet, when the calf is not slaughtered in the halal way, as being haram (though not all, as the rennet was milk the calf had eaten and was extracted from its stomach; it was never part of the calf’s body).

Many observant Muslims would never eat a meal in a restaurant which routinely cooked meat that was not halal, even if some of it was. Therefore, the number of Muslim customers the restaurant would attract would not be that great, although an advantage could be gained if the meat was cheaper (which halal chicken often is).

The Daily Mail got Taj Hargey, a fringe figure who is always on hand to tell non-Muslims what they want to hear about Muslims (namely that we’re extremists and we’re doing Islam wrong) to write a piece full of plainly false claims about the subject (see here for more on Taj Hargey’s witterings). (I am not sure if it was in the print edition, but appears as part of their “RightMinds” blog section.)

He claims, for example, that “it is completely wrong that the food sensitivities of Britain’s Muslims — who amount to just 4.8 per cent of the population — should take precedence over the other 95 per cent”. Of course, in any given area, the proportion of Muslims may be much higher than 4.8%, but the reason much supermarket meat is halal is because it comes from New Zealand which also exports to the Middle East, as already stated.

He goes on to claim that the Islamic rules on halal meat have “no theological basis in the Koran, the supreme text of Islam”, but rather comes from the hadith, “a secondary and often suspect source”, and alleges that “three of the main fundamentalist Muslim sects”, the Wahhabis, Muslim Brotherhood and Deobandis, “are foisting their fabricated notions about it down our collective throats”, which is utter nonsense, because mainstream Islamic scholars who do not belong to any of these sects insist that meat be slaughtered with the prayer (which cannot be said at the time of consumption over meat that was not slaughtered with it; that is a baseless position which has been refuted).

As for the position of the hadith, Muslims are well aware that there are hadith which are weak or even fabricated, but these are well-known. The word of the Prophet

has always been regarded by the Muslims as a main source of Islamic belief and law. The words do not have the same status as the Qur’an, but they are still Revelation. The article comes at a time when Muslims, especially women, face persistent harassment in public places in many parts of the UK.

Ava Vidal wrote two articles this week for the Telegraph, one of them about the harassment she found that Muslim women were describing being subjected to, and the other about the abuse she received when she wrote the piece.

Vidal found that abuse of Muslim women has become normal, and that many women experience several incidents of verbal abuse or threatening behavior a week, but there have been some violent incidents including a pregnant Muslim woman being pushed to the ground and stamped on. Vidal found that most of the abusers were young men (the experience of my Muslim female friends is the same) and that some of them displayed misogynistic attitudes of their own, regardless of their purported concern for “oppressed Muslim women”.

One of her sources also observed that there was a link between media coverage of Muslims and upsurges of hostility, and the content of the abuse she received. So, prominent and hostile coverage of halal meat could easily lead to further attacks of the sort Ava Vidal identified.

As Richard Peppiat wrote in his resignation letter from the Daily Star, which alongside the fellow Desmond title the Daily Express has printed a number of prominent stories that were hostile to Muslims (and not just terrorists but ordinary Muslims):

You may have heard the phrase, “The flap of a butterfly’s wings in Brazil sets off a tornado in Texas.”Well, try this: “The lies of a newspaper in London can get a bloke’s head caved in down an alley in Bradford.”

The role of the media in fostering hostile attitudes to populations that subsequently became victims of genocide is a well-documented fact, and we should not consider ourselves so civilized in this country that we are safe from falling into the abyss of communal violence in the right circumstances.

In Sri Lanka right now, where the Buddhist majority has succeeded in defeating an insurgency by the Tamil minority they oppressed (although the insurgency was brutal and committed atrocities of its own), they have now turned on the Muslims who supported them, and attacks on the halal meat industry have been an important part of that.

In France, fascists who control town councils have abolished pork-free school meals and told Muslim children that they can either eat pork or go hungry.

They do not do this out of concern for animals, as the suffering factory farming inflicts on animals far exceeds the brief pain of slaughter; rather, it is deliberate oppression. The Sun does not attack supermarket halal meat because its audience is really that bothered (many of them will have gone on holiday to Muslim countries where all the meat is halal, and eaten in Indian restaurants and off-brand fast food joints where all the meat is halal).

The purpose is to stoke hostility so as to sell papers, because it sells, but a by-product of selling papers is violence on the streets.

We cannot have violence in the streets and we cannot have government by tabloid; their activities must be regulated by law, or they must be closed down.