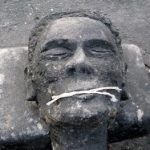 We are a decent society; we do not tolerate vulgarity in the workplace, we value scholarship and professionalism, we do not even accept indecency from our highest office.  But as a nation, we undermine our own values by accepting the actions of those who incite hatred hatred and bigotry and clothe their actions under the banner of free speech. Just because we can say whatever we want does not mean that we should say whatever we want.

Whenever a newspaper decides to publish a racist cartoon — whether towards President Obama or the Prophet Muhammad (peace and blessings be upon him)– the public debate becomes that of the author‘s right to free speech.  With each vulgar event a false cloud of propaganda begins by the author and his supporters, rallying on a premise which is truly invalid to begin with; that the author’s freedom is being infringed upon.   But know one has ever argued for the right of free speech to be forcibly taken away? Rather, the voices of opposition are about the humanistic and ethical duty to uphold our society to high moral standards.  In other words, for these authors to stop being jerks.

The scales of the law in the U.S. is  balanced enough to guarantee that no-one is imprisoned or loses his freedom for socially intolerant speech.  Rather, the authors hide from the scarlet letters of shame and humiliation which a pluralistic society must inevitably brand them with. Now, in order for the fight against those that promote hate, I argue that our society must to move to discrediting the authors as plain old bigoted and uncivilized human beings  unwilling to live in peace with the upcoming world.

In the most recent example I can give, Geert Wilders — the dutch lawmaker and creator of the 15 minute film ‘Fitna’ which sparked protest around the world for its depiction of the Qu’ran as a book of violence — was invited by Senator Jon Kyl to hold a private screening of his movie in the LBJ room of the US Capitol last Thursday. To add insult to injury, they chose to hold the screening on the same day Senator John Kerry held a hearing of the Foreign Relations Committee on how to improve relations with the Muslim world. Former Secretary of State Madeline Albright, Admiral Fallon, and Dalia Mogahed of the Gallup Center for Muslim Studies testified at that hearing as well.

Thankfully, many leaders have in fact spoken out.  Senator Kerry and other senators publicly expressed their regrets during the hearing at Wilders’s screening in the capitol. Earlier, Mr. Wilders had even been barred from entering London; the British Foreign Secretary commenting to the BBC on this stating: “There is no freedom to stir up racial and religious hatred”.

But Wilders is not the last of those who will seek to stir their hatred under free speech; and as we have seen with the vulgar cartoon on President Obama, not only Muslims are being attacked. We have seen the resurgence of a pre-civil rights mentality within a major US newspaper cartoon, depicting the President as a monkey. Again, the newspaper hid under the ‘right to free speech’ for its justification at this bigotry.

Moral Obligation. The real issue that must be continually brought up is not of free speech, but of moral obligation. Yes, everyone has a right to be immoral, indecent, and vulgar; but our society can have no room for these if we are to ever progress.  Finally, the fight for freedom of speech used so honorably in times of oppression and totalitarianism should not be molested  by the  indecency and false pretense of it’s propagators that we see it being used for today.