In recent days, the incident of Malala Yousafzai shot by the Taliban for promoting education for girls has flowed across all media outlets.  It was the story of a young girl who bravely campaigned for female education under the rule of the Taliban. Charging her for “promoting secularism” the Taliban ordered a gunman to shoot her in the head on the 9th of October, 2012. Now, Malala has been flown to the UK for treatment. Former British Prime Minister, Gordon Brown, has launched a UN petition in her name using the slogan, “I am Malala” demanding that all children worldwide be in school by 2015.

Our sincere duas are with Malala and her family, and I can safely state that the majority of Muslims will agree on basic female education not being forbidden in Islam and denounce the brutality of the Taliban’s actions. Attempting to murder a young person is not in any shape or form in compliance with the teachings of Islam.

However, while condemning the Taliban’s actions and supporting the UN petition, it is also important to highlight two main issues with the media coverage of this story.

The first, and the most obvious, is the high media attention given to Malala’s case as compared to the complete disregard of countless children killed as “collateral damage” in the Global War On Terror (GWOT) under the Bush administration, and the recent deadly drone attacks under the Obama administration. It is estimated that in the first three years after President Obama took office, between 232 and 535 civilians have been killed by drone strikes alone, including more than 60 children. Yet these cases have not received even a fraction of the same media coverage. Only a small minority of media centers have problematized this unbalanced depiction, in particular the New York Times, who have taken an interest in the secrecy surrounding the usage of drones.

Why is Malala’s case different?

Why was she transferred to the UK for special treatment, whilst other children injured by the American forces were left unattended? Why is her name plastered on newspapers and placards and other children’s names not even known? The answer lies in Malala’s case being used to highlight the problems with the Taliban’s regime, thereby boosting the justification on the current GWOT. Ever since the war was announced, the condition for Muslim women has been exploited to serve as a justification for their occupation. Despite this, the public were still outraged and countless demonstrations against the war were undertaken. The financial crisis has raised this issue again, as the cost of keeping troops overseas and the subsequent cuts directly affects the population. Yet the governments still insist on the necessity of keeping armed forces in Muslim lands to weed out insurgents and “liberate” Muslim women shackled by tradition. Thus Malala’s story has been a pertinent case study, which discreetly justifies the past and future war efforts. 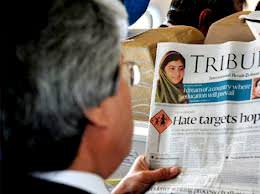 By not giving attention or special treatment to the countless children killed and injured in the GWOT, it not only dehumanizes them but it devalues their life. This makes it easier to brush them aside as necessary deaths on the road to peace and liberation in these “uncivilized” countries. However, the attention that Malala received, gives value and worth to her life and her cause. Since female education is in line with what the West deems as “modern” and “liberal”, her cause is instantly worthy of attention and her life is more precious. Whereas the other children are killed in the name of bringing “modernity and liberalism” to these regions. Their life is devalued against these principles and as a result subsumed under the guise of progression.

This brings us to the next broader and subtler issue in the coverage of this story, namely the division of the world into two spheres:  the modern civilized West vs. the rest. As Bush said in his infamous speech after 9/11,

“You are either with us and with nations which embrace freedom, or you are with the enemy.  There is no in between.”

Malala’s story is used to juxtapose these two spheres.  She was the girl campaigning for female education in order to liberate and progress women as a whole, against fundamentalist men enslaving her under the name of Islam. She represented the values of modernity whilst the Taliban represented everything opposed to it.

Polarizing the world with this narrow understanding of modernity and liberty has dangerous implications for Muslims. According to a YouGov poll Britons (43%) and Americans (39%) believe in a fundamental clash of cultures between Islam and the West. The issue is that the bipolar view of the “rational West” and the “erratic Islamic fundamentalist” does not acknowledge the majority of Muslims who want to embrace modernity yet define it using their own terms.

Most Muslims want to weed out cultural accretions accumulated over time and re-establish the essential pillars of Islam, in order to practice the true essence of the faith. It is not a simple case of modern vs. anti-modern; not strictly espousing Western values does not result in a fundamental clash. In this particular case, while we agree to female education – and associate the banning of it to culture rather than religion – we do not share the same long-term vision of liberation for women as a whole. For example, our version of female liberation necessitates education but also hijab, modest behavior and relationships within the confines of marriage. While this does not neatly line up with Western notions of female liberation, it is not a direct contradiction nor a cause for deep clashes or disputes.

However, the constant focus in the media either on extreme Muslims, or those Muslims fighting for causes only deemed progressive in the West, continuously embeds this false polarity. This was why when France banned the veil, the general non-Muslim public found it difficult to understand how a modern Muslim woman can choose to wear the veil; they could not reconcile between liberty and the veil. Similarly in the Egyptian elections, skepticism surrounded Mohammad Morsi and his ability to modernise Egypt due to his Islamic background and his choice in Prime Minister Hisham Kandil as he sports a “salafi beard!”

Therefore, while we condemn the Taliban for their brutal actions and pray for Malala’s recovery and her cause, we also pray for the countless civilians killed in the name of “progression” or “weeding out insurgents”. We also pray for the Muslim women in occupied lands for reports confirm that Afghan women’s condition have become worse after the GWOT. If only these stories received the same media attention, then maybe our cause will be humanized, and this bipolar view will collapse.