Once, while in class at college, an Arab girl I was sitting next to said quite loudly to another, “Hey, give this paper to the ‘abdah” referring to a black girl in the class. I wondered if she was even aware of what she was saying in English. Did she think that ‘abdah translates to “black girl” and never thought of its true meaning? Did she think that I didn’t understand?

My name is Hakeemah Cummings, I am a 25-year old Muslimah living in the southwest suburbs of Chicago, IL.  I have lived in this community for a number of years and attended an Islamic school here.

Alhamdulillah, my community has a huge Muslim population, largely Arab, and is well-established with two large masajid, two Islamic schools, a community center, and countless Muslim-owned businesses and organizations.

Alhamdulillah, I am very blessed to live in a community so dense with Muslims in a city that is so large and diverse.

Living in this community as long as I have, I have picked up a lot of the colloquial Arabic and have formally studied the language in high school and college. I remember back when our family first moved into this community, and I started attending the Islamic school in 7th grade, I heard the word “slaves” or ‘abeed (‘abdah (f.) ‘abd (m.) ) used quite commonly to refer to black people.

English being my first language, I was used to immediately translating Arabic words to English to grasp the meaning – “slave”. I quickly took offense – as a black Caribbean muslimah, I was a minority within the community and immediately felt hurt by this term. I remember people would make the mistake of using this word around me, mostly in reference to African-Americans. 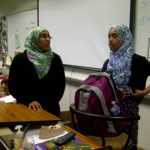 If I was in earshot, the person would quickly excuse themselves, saying that they didn’t mean me, they meant … them. But what, really, is the difference between me as a black person, and “them” as black people? What makes “them” slaves? It was horribly rude, and made me extremely uncomfortable.

Other times, the word would be used casually with no concern.

“That neighborhood is scary. The ‘abeed live there…”

in reference to the south side of the inner city of Chicago. Or people would say a certain kind of clothing, music, mannerism, way of speaking, or hairstyle, is “for the ‘abeed.”

Once, while in class at college, an Arab girl I was sitting next to said quite loudly to another, “Hey, give this paper to the ‘abdah” referring to a black girl in the class. I wondered if she was even aware of what she was saying in English. Did she think that ‘abdah translates to “black girl” and never thought of its true meaning? Did she think that I didn’t understand?

Clearly, if she had said “Give this paper to the slave” it would have been a revocable remark, and a confrontation may have ensued.  Not only was this term used with blatant disregard, it was furthermore tolerated by the likes of me, who cringed at its use, though I kept quiet. I remember angrily thinking, “Aren’t we all ‘abeed (slaves) of Allah?”

Usually, the word was used to refer to African-Americans, who are descendants of the African slaves who were stolen from Africa and brought here to the US, enduring the worst forms of oppression for many generations.

Other ethnic groups were enslaved as well in their own histories. It may come as a surprise that Arabs, as well as countless other ethnic and racial groups, have a history of being enslaved as well. That gives no one the right to call the Arabs of today slaves, so African-Americans should not be subject to that degrading terminology either.

As I grew older, I found a voice that I didn’t have when I was younger. Now that I have younger siblings who are enduring the same types of racially insensitive incidents, I felt that I must address this issue head-on.

That’s why I started the “We are all ‘abeed of Allah” campaign; as Muslims – above any ethnic, racial, tribal, or nationalistic association we assume pride in – as Muslims, we need to know that the use of this word is a slur, and that it is degrading, insulting, ignorant, inexcusable, and will no longer be tolerated.

Furthermore, everyone, regardless of race, should proudly claim the word “slave” for him or herself – I am a slave, you are a slave, we are all slaves.

refers to us all as His slaves beautifully in the Quran on numerous occasions, and it is a term of honor.

This word “abeed” encompasses all of those who strive to worship Allah: an honorable way of life and the purpose for which He created us. Instead, some use this word to marginalize and insult others, stripping the word of its beauty and dignity. Shouldn’t we all aspire to be slaves of Allah, and eliminate the pride we feel in the superficial labels we hold to such high standards: Arab, non-Arab, black, white, Hispanic, Asian, rich, and poor.

All of these labels bring about arrogance and misplaced pride. The Prophet (SAW) warned against tribalism, racism, classism, sexism, ethnocentrism, and nationalism, and even emphasized this warning in his last sermon, which indicates the importance this issue in Islam.

I decided to take action on this issue, so I approached the administration of my old high school to organize a “Celebrating Diversity” event where we had speakers, activities, panel presentations, and group discussions to address these issues in our 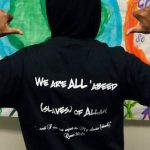 schools and broader community. At the event’s core was an emphasis on our religious obligation as Muslims to be fair, sensitive, and kind to others.

Racism is a huge issue and I knew that one event could not change completely, but I firmly believed that with every positive action there could be a change in the right direction.

I decided to tackle the issue of the use of the word ‘abeed as a racial slur. This began with T-shirts and wristbands to raise awareness at the Islamic school, and then expanded to a Facebook campaign page, where the campaign quickly became international.

Since the campaign began on March 2, 2012, it has grown exponentially, and I hope that the awareness spreads even more. I have gotten much support from the local community, and even more overseas, due to Muslim YouTube gurus and bloggers who have supported the campaign through making videos, writing articles, and posting about the campaign on their social networking sites.

The goals of the campaign are as follows:

1) To raise awareness of the meaning of this word in English. The translation is “slave”, not “black”

3) To teach this word the way the Almighty uses it: to refer to all of his worshippers, regardless of race, in an honorable way.

4) To break the link the use of the word “abeed” and the black race so that there is no ultimately no racial connotation.

Let us ALL, regardless of race, strive to be ‘abeed to the One whom we dedicate our lives to. Be proud to know that you are an agent in combating the racial divides that plague our ummah. Let us all make the claim:

By Hakeemah Cummings, founder of “We are all ‘abeed of Allah”