A study by the University of Haifa has asserted that Arabic is ‘hard to read,’ with the conclusion supported by data from thirty seven university students who, when flashed words in Arabic, were unable to read them as quickly as they could words in English and in Hebrew. All students were native Arabic speakers who were also able to read English and Hebrew, and Professor Zohar Eviatar, who led the study, implicated the visual complexity of Arabic as being the culprit.

This study pokes a small but ‘scientific’ pin into the voodoo doll of Islam’s world image. Because apparently it’s not enough that we smell bad, beat all four of our wives, threaten people with grammatically incorrect protest placards or terrorize the world, now our language is hard to read, too.

As Muslims, we greet each other in Arabic, we read the Qur’an in Arabic, we memorize pages of it and copy out lines from it.  We have children completing the memorization of the entire Qur’an- 114 surahs in 30 sections – before they’re out of grade school, and on top of that we believe that God said:

“And We have indeed made the Qur’an easy to understand and remember: then is there any that will receive admonition?” (Quran 54:17)

So how should we feel about this study?  Warily amused, but perhaps for the wrong reasons.  It would seem that the study was fraught with many major errors, a few of which were very kindly pointed out in a recent article by Shaykh Riyad Nadwi, PhD, published by the Oxford Cross-Cultural Research Institute. The biggest of errors, it would seem, is the lack Arabic literacy of those conducting the study. 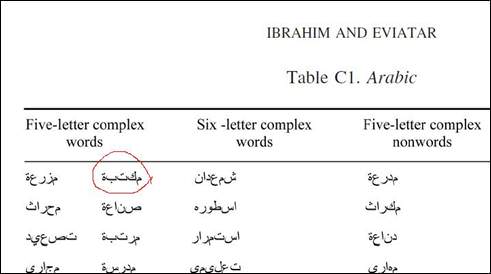 The preceding image is a sample stimuli sheet from the study itself, and anyone literate in Arabic, regardless of their fluency level, would have a hard time reading it.  Why?  Because it’s been written wrong.  Arabic script flows in the way that cursive does in English – with the letters of a word joining together according to set rules and forms that make it very clear which word each letter belongs in.  The joining is similar to the use of spaces that separates two words from another.  It also helps determine whether certain letters, like ‘Ya’, will act as consonants or vowels.

A ‘Ya’ in its initial form is a consonant. A ‘Ya’ in the middle of the word can make one of two vowel sounds – ‘ee’ or ‘ai’, and a ‘Ya’ at the end of a word most often makes the sound ‘ah’.  Even if you don’t read Arabic, a simple comparison between the following two words yield some very obvious differences.

The image on the right shows how the word is supposed to look, and the image on the left shows how it was displayed.  Given a few seconds, you could easily work out the word intended, but the students in the study were shown each incorrectly written word for only one-fifth of a second.

And if you still don’t get what the problem with the study is, then try writing out a few words in English, in all capital letters, removing the spaces and a majority of the vowels, and when university students can’t understand what you’ve written when flashed for less than a fifth of a second, tell them that English is hard.  And also, that beans on toast give people gas.

Linguists and university professors attacking our language can get in line behind the politicians, playwrights, journalists and news anchors attacking everything else about Islam.  And the whole lot of them should relax and work on something more useful like finding common ground.

Arabic is left-hemisphere specific?  How nice, so are German, Spanish, Urdu, and a minor language known as English.

The publicity this study is receiving might be justified if it were a slow news day for the world.  After all, when was the last time the BBC talked about the distinctive right-brained approach used by people reading Kanji Japanese?  However, the prominence it’s receiving right now, when political issues are being heated to boiling point in the US about the Park 51 Mosque and Jesus-Loving Christians are advocating ‘Burn a Qur’an Day,’ this is simply in poor taste.

Finding long-term peace is contingent upon finding similarities instead of digging up differences, and common ground instead of bright new battlefields.  An academically unsound study conducted by a university located in a country locked in a bloody, 50+ year land-battle with Arabs that takes a linguistic jab at the language their holy book is written in – is not international news.  It’s bad science and bad journalism.