As halal grocery stores across the country are reveling in the midst of the Ramadan buying frenzy, a concern on many Muslims’ minds are the origins of the Ramadan dates that are carried in the stores. Some come from California or Saudi Arabia, but others marketed under the name Jordan Valley are from Israel.

Israeli date imports in the US are valued at $51 million per year.

After the 1967 Six-Day War when Israel captured the Jordan Valley from Jordan, tracts of land were taken from Palestinian farmers and allocated to settlements and military camps. According to the Inter Press Agency report, the Jordan Valley holds 28.3 percent of the West Bank’s land, and is ‘the largest single Palestinian territory under full Israeli military and administrative rule, classified as Area C since the 1990s.”

Only 13 percent of the valley is under Palestinian rule, known as Area A. In 2005, Palestinian civil society issued a call for a campaign of boycotts, divestment and sanctions (BDS) against Israel until it complies with international law and Palestinian rights.

Hani is a Palestinian American who lives in Northern Virginia. He often shops at local halal grocery stores. “When I saw the [Israeli] items on the shelf, I asked for the manager and I brought it to his attention. Weeks later the remain on the shelf. As a Palestinian and a customer, I find this offensive….when non-Muslims are boycotting Israeli goods to support Palestine and the largest Muslim grocery store sells these goods, it’s an insult,” says Hani. He says that they sell Israeli dates—labeled as Jordan Valley—and pickles that are made there too. His friend who grew up in Jerusalem and reads Hebrew picked out a can of Galil pickled cucumbers, which is sometimes not marked as an Israeli product.

The manager of the store says that often they do not know where the products originate from and that he checked in the store but did not see that brand of dates in the store currently.

Hani just returned from the border of the West Bank and Jordan where he works with a relief organization. Everyone in his contingent entered West bank, all his American colleagues, except him. He was stopped and interviewed for six humiliating hours and then turned away. His American passport could not give him access to see his mother and the rest of the family. “It reminds me of what the Nazi[s] used to do. They have a number for me when I go, because I was born in Palestine. They like to play games and harass people like me.”

The last time he saw his mother was in 2009, when he entered through Egypt. “There is no other way for us to get back to the West Bank,” he says. The Egyptian government gives diaspora Palestinians a 3 day notice in which they have to book tickets to enter through Gaza. Every time someone enters, there is no guarantee that they will be able to leave as the border can close indefinitely.

Hani’s family is from Beit Lahia, a city in northern Gaza. He says that Israeli companies come and buy strawberries from there and sells them under two different packages, according to where the BDS movement is stronger, such as in Europe. The product marketed there say  ‘product of Palestine’. “It’s a scam…..look at their website it says Israel…nowhere does it say Palestine. They are just using the Palestine thing for marketing.” Here is an extensive report that lists companies that take Palestine goods and label them Israeli. 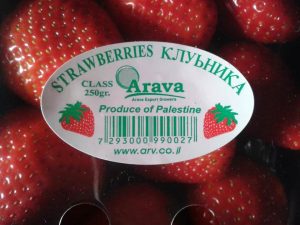 Sometimes the packaging says ‘grown by Palestinian farmers’ and this refers to Palestinian ‘slave’ laborers on Israeli plantations. According to the Associated Press,  Israel has played down the impact of the BDS campaign by Palestinian activists, but it has turned into a harsh reality for the economy. Recently Oxfam, the international aid organization and their former ambassador, actress Scarlett Johansson, were in the news over the showdown over Sodastream, another Israeli company operating in the settlement. Public pressure forced Oxfam to drop Johansson after she became the model for Sodastream.

Indus Foods in Silver Spring, MD, owner Raja Hamid says that although the price and quality is great, he doesn’t carry the Jordan River brand dates as the customers demand California or Saudi medjool dates, not Israeli. “We tell our suppliers, don’t give them to us,” says Hamid. Almost 30 percent of his date customers have made it known to him that his stores should not carry them.

January 2014 saw intensive BDS activity in academia. Following the American Studies Association (ASA) adoption of a BDS resolution in December 2013. These calls to action recognize that Israeli academic institutions (mostly state controlled) and the majority of Israeli academics contribute directly to the Israeli occupation and apartheid or are complicit through their silence. The Palestinian campaign for the academic and cultural boycott of Israel is inspired by ‘the historic role played by people of conscience in the international community of scholars and intellectuals who have shouldered the moral responsibility to fight injustice, as exemplified in their struggle to abolish apartheid in South Africa through diverse forms of boycott.’

Two unconstitutional bills were introduced in the state capitol of Maryland designed to limit First Amendment rights in Maryland universities and college campuses by targeting student groups that participate in the campaign for boycotts, divestments, and sanctions (BDS), according to the Maryland Chapter of the Council on American Islamic Relations

SB 647 which aimed to restrict activities of campus student groups which engage in peaceful boycotts against universities and colleges of other countries, and prohibited peaceful dissent by withholding state funding to Maryland’s institutions of higher learning was defeated.

“They are trying, [restricting] commentary on Israel- they fear this is next thing. [BDS] a huge thing. It is becoming more mainstream, specifically for goods made in the settlement,” says Hani.

This week the General Assembly of the Presbyterian Church USA voted 310 to 303 to divest from three US companies that profit from Israel’s military occupation of Palestinian lands.  After 10 years’ worth of effort on this issue, commissioners passed a resolution to divest from Caterpillar, Hewlett-Packard and Motorola Solutions.

When people of other faiths are recognizing and boycotting, then it pains Palestinians to see Muslims supporting the occupation, even if it is out of ignorance. Muslim business owners and consumers must make an effort to learn more about BDS and join in the movement.

A version of this article was printed in The Muslim Link, after which I received phone calls from store owners in my area promising more ethical purchasing and awakened consciousness of the suffering of their Palestinian brothers and sisters. If you see an occupation based product in your local Muslim store, speak up and let the management know.