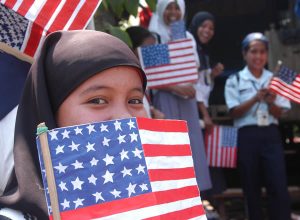 When the new Congress convenes in January, the expected Chairman of its Homeland Security Committee plans to hold hearings on the “Radicalization” of Muslims… American Muslims.

Told of Mr. King’s plan, Muslim leaders expressed strong opposition, describing the move as a prejudiced act that was akin to racial profiling and that would unfairly cast suspicion on an entire group.

Abed A. Ayoub, the legal director for the American-Arab Anti-Discrimination Committee, said Mr. King’s effort ignored that Muslim leaders around the country had been working closely with law enforcement officials since the 2001 terror attacks.

“We are disturbed that this representative who is in a leadership position does not have the understanding and knowledge of what the realities are on the ground,” Mr. Ayoub said, adding that Mr. King’s proposal “has bigoted intentions.”

Salam al-Marayati, the executive director of the Muslim Public Affairs Council, also expressed deep concern and noted that his group would be holding a convention this weekend at which members would discuss the impact that the Republican takeover of Congress could have on Muslims.

“He basically wants to treat the Muslim-American community as a suspect community,” Mr. Marayati said of Mr. King. He added that Mr. King was potentially undermining the relationship that Muslim leaders had sought to build with law enforcement officials around the country. Tensions have occasionally erupted in recent years over counterterrorism measures that civil rights groups and others said had gone too far.

In 2007, for example, the Los Angeles Police Department was forced to abandon a plan to create a map detailing the city’s Muslim communities after civil rights advocates and Muslim leaders denounced the effort as a form of racial profiling.

None of these quotes accurately convey the fact that Americans should already know how evil hearings like these are: 1950’s America came to be known infamously as the McCarthy era, after the Congressman who headed the House Unamerican Activities Committee.

In the 1950’s a subpoena from HUAC would be as chilling as a greeting card from the Cardinals of the Spanish Inquisition. Would any American Muslim not be chilled by a subpoena from these hearings? To have to explain to coworkers and neighbors? In the 1950’s Communist hunters used the premise of protecting America to undermine and investigate civil rights leaders and others, too. And now the premise is built right into the name of the Committee. Then the tyranny of HUAC only ended when its leader was publicly disgraced, but the Committee itself survived until 1975.

Mr. King, who has conveyed his intentions to Republican leaders in the House, said he
would seek comment from mainstream Muslim leaders so that the hearings he was planning to hold were not one-sided, with only people critical of Muslims. (emphasis added)

America’s Muslims should not have to stand up in front of any Committee of Congress and prove our loyalty. It should offend all Americans as much as if the Congress held hearings on the loyalty of Catholics, Jews, or Mormons.