On July 11, Allah gave me tawfeeq through an online article to find new respect for my profession, and specifically for that segment of the profession in which I have been toiling since I took the leap and joined the ranks of practicing attorneys in the US.

Shortly after the capture of Ratko Mladic we wroteÂ a short piece on the political/legal issues surrounding â€œthe G-wordâ€: genocide.Â  But there is a fascinating e-discovery element to these war crimes proceedings, and how the United Nations faces the need to manage the accumulation, organization, and access to evidence relating to war crimes.Â  The UN team that is responsible for gathering and handling the information to be used in such trials faces the challenge of making millions of documents in many formats and many languages available to prosecutors, defense attorneys, judges, and other court stakeholders. Â This war crimes evidence originates in multiple formats from disparate sources, for example â€” TV program tapes, radio broadcasts, news and military photographs, home movies, home photos, recorded telephone communications, and other rich media formats in addition to masses of paper documents and the standard electronic text of emails and other natively electronic documents.

The article by “Project Counsel” is very well written, mashaAllah: “Prosecuting the unspeakable: how e-discovery aids war crimes trials.” Given that many readers of MM will have NO CLUE what e-discovery means, please allow me to offer a different explanatory title: “Prosecuting the unspeakable: how one of the least glamorous sides of the legal profession aids war crimes trials.” 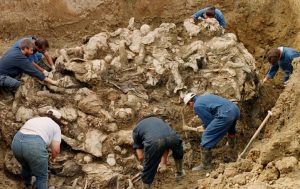 Image used with permission- please do not reuse

And not just any war crimes — the article is about how attorneys are using advanced technology to analyze vast amounts of evidence, in some 13 languages, to help bring to justice the war criminals responsible for the atrocities committed in the Balkans, including the attempted extermination of all Bosnian Muslims, mostly by Serb-nationalists.

A video embedded in the article has subtitles in many languages, including Arabic and English. Â Worth reading and watching!

Note: All excerpts and links used with permission of Project Counsel.