[dropcap size=big]I[/dropcap] believe this holiday season will be the usual for America. Families will travel as usual, gather as usual, and share the warmth of each other’s presence as usual. Some will travel hundreds of miles in the anticipation of reminiscing on moments that only loved ones could share in euphoria together. Plenty in fact, will muster the strength to mend broken hearts and agree that solace should always supercede petty differences among kin.

People in America will say humble prayers in English, Spanish, Dutch, Malay, Korean, Arabic, French, Xhosa, Fula, Urdu, and partake in meals prepared in harmonious glory. All will explicitly or implicitly offer thanks for the things that are missed in the minutia of day to day life. Homes are to become nightclubs, temples, mental rehab facilities and four to five star restaurants. Muslims of all ethnicities will, per usual, battle with the dichotomy of enjoying their bonds, and being vigilant over the bigotry that is arresting the minds of the American people, from layman to lawyer. Every swallow of food doubles as a reminder that under the current climate, even eating among your beloveds may soon be a privilege worth memorial.

I witnessed the holiday season move calmly upon us almost undetected, mute even. I watched Anti-Muslim Bigotry, Racism, and Xenophobia mutate weekly leading up until now, with the Paris attacks being a catalyst for outright hysteria. Syrians refugees shoved to the margins of the country and their own humanity, are boxed in political fistfights— cold, hungry, no doubt weary.

And the lifelong neighbors of Muslims are being challenged to lift a skeptical gaze at the people who have brought light to their communities. As a 27 year Black man I too know this ‘usual’ gaze. It ebbs and flows with necessity for White America. Yet the ignorance coated in hate remains a constant variable.

Today, Muslim women of various hues are being followed by lone gunmen into masajid. Today, molotov cocktails collide upon the centers of worship. Today, Muslims are attacked and beaten to the chants of “Go back home”. To experience 21st century American racism is to acknowledge that humans who make up political parties have a future for Muslims that entails Holocaust inspired IDs, internment and third-class citizenship. 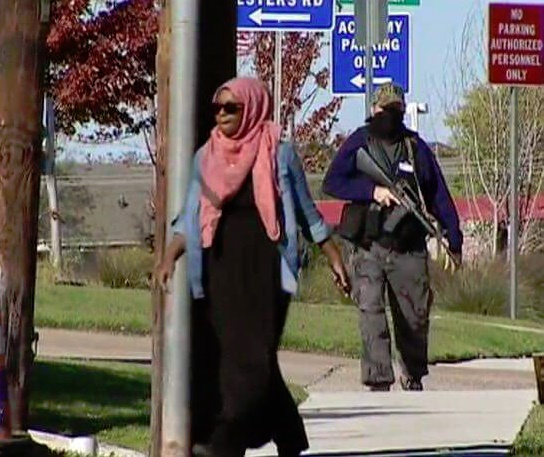 My skin ports me indefinitely to segment of our society that again, is intimate with these injustices. The heroic struggle of my people afforded all hues of mankind certain rights we are now witnessing politicians and fanatics war to take away here. Thus, our struggles intersect. We no longer have the luxury of turning a naive eye to White Supremacy. We can’t afford for our children to be whole-saled hatred hourly. Specifically what vanguard to this madness can immigrant Muslim families call their own? How do we define a defense that doesn’t continue to kindle the same bigoted flame that Donald Trump is using to light his path to one of the most sadistic political campaigns ever?

As usual, America expects the influx of cash into the economy from hoards of consumers almost coming to blows for the next big bargain. So many across the Black community have promised that in the wake of state sanctioned murders tipping scales likened to the Jim Crow era, that they refuse to be robbed of life and money. The #notonedime movement as well as No Black Friday is a push for economic resistance.

If our country and those who deem themselves Americans are so sure that immigrants are criminals, drug dealers and rapists than I urge the immediate economic withdrawal of “Brown Dollars” i.e. immigrant dollars this holiday season.

If our country and those who deem themselves Americans are so sure that Muslims are prototypical terrorists than I urge the immediate economic withdrawal of “Muslim Dollars” this holiday season.

If we are fully unaware that White Supremacy is not only the greatest domestic terror threat to the American people committing twice the amount of politically aimed violence then we will let those who dwell in blissful ignorance shop by themselves.

Our White Muslim brothers and sisters who are caught in the middle of this crossfire are in a pivotal position to aid one of the most critical boycotts in our history. You too have a stake in this agenda.

For everyone who has been turned a twisted eyed and guillotined with hate speech toward their Islamic faith know that you simply refusing to participate in the grazing cow show that is the holiday season, is more than enough. Remember the children who have not touched these shores, that wait on the promise of unconditional compassion at borders without parents.

Think deeply then, about the irrational hatred that waits on the tongues and gavels of politicians. Black dollars will not make an appearance in this cycle of conspicuous consumption, #notonedime  and it is my belief that Brown dollars will be absent as well. If not for yourself, do it for those who have watched the awe-inspiring propaganda that welcomes the poor and indigent but in reality hates the very people that make America whole.

Not a Muslim dime. 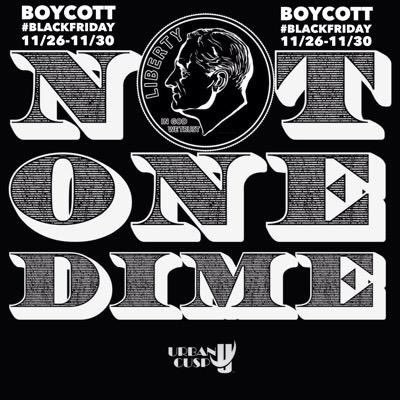