On August 6, the women’s basketball tournament at the 2016 Summer Olympics will tip off in Rio de Janeiro, Brazil, with 12 teams representing 12 countries vying for the 12 gold medals awarded to the players on the squad that finishes No. 1.

Despite the presence of two Muslim-majority countries in the tournament (Turkey and Senegal), not one of the 144 players expected to compete in Rio will be wearing the traditional hijab headscarf on the court. And that’s not simply because none of them want to — but also because the rulebook does not allow them to.

FIBA, basketball’s international governing body, currently has a rule known as Article 4.4.2 that prohibits players from wearing any “headgear” or “hair accessories” on the court, with the exception of headbands that do not exceed five centimeters in width.

That prohibition includes headgear and accessories worn for religious reasons, such as hijab headscarves for Muslim women, yarmulkes for Jewish men and turbans for Sikh men.

That prohibition covers all basketball games, leagues and tournaments sanctioned by FIBA — which includes most professional leagues outside of the United States, the Olympics, the FIBA World Cup, and regional contests like AfroBasket, EuroBasket and the FIBA Americas tournament. 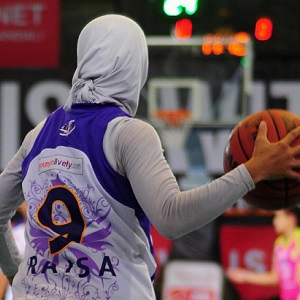 Thanks in large part to public and political pressure resulting from the efforts of Muslim female basketball players who took to social media protesting Article 4.4.2 with the hashtag #fibaALLOWhijab, FIBA finally announced in September 2014 that they would begin a two-year “testing phase” during which they would allow hijab and other previously banned headgear in some international competitions (such as the 3-on-3 basketball tournament at the Youth Olympic Games) and review the results before voting whether or not to officially change Article 4.4.2.

Which brings us to August 2016. On a yet-to-be announced date in the same month that the Rio Olympics will begin, FIBA’s board will hold a meeting to vote on the headgear issue.

Indira Kaljo and Bilqis Abdul-Qaadir, two Muslim American women who played college basketball in the U.S. and have been at the forefront of the #fibaALLOWhijab movement, are spearheading the campaign through Change.org to acquire signatures and support to influence FIBA’s decision.

Here is a video posted by Kaljo explaining the campaign:

Kaljo finished her collegiate career at Tulane University in 2010 before playing professionally in Ireland and then in her native Bosnia. Raised in a Muslim family, she did not decide to wear hijab until after her first season in Bosnia, at which point she learned about the FIBA rule. Kaljo, 28, has not played professionally since then.

With her basketball career on hold, Kaljo founded and now serves as president of Global Aktivne, a nonprofit organization based in Saudi Arabia that aims to empower women and girls through sports and other avenues.

Abdul-Qaadir is the all-time leading scorer (male or female) in Massachusetts high school history. In 2010, she made history again by becoming the first player to wear hijab in an NCAA Division I basketball game. She finished her collegiate career at Indiana State University in 2014, where she was named all-conference, and it wasn’t until she began to pursue a pro career that she learned of the FIBA rule.

Although she’s certainly talented enough to make her living as a basketball player somewhere on this planet, the 25-year-old Abdul-Qaadir has not played a minute of pro ball. She went on to finish her Master’s degree at Indiana State and currently works as the athletic director at Pleasant View School, an Islam-based school in Memphis, Tenn., that serves pre-kindergarten through high school students.

I have not been able to find out exactly when Article 4.4.2 became part of the rulebook established by FIBA, an organization that has been in existence since 1932.

“I was under the impression that it was inappropriate for Muslim women to participate in sport for the simple reason that I had never seen a Muslim female athlete wearing a Hijab in the media,” Elbadawi wrote in her Change.org essay. “Therefore it seemed like playing anywhere outside of the school environment and level was an unachievable goal.

“Having visibly Muslim girls playing sport on our screens and competing in basketball will impact the lives of many young girls because playing basketball will become an (achievable) goal.”