The events of the past two weeks have highlighted the disastrous outcomes that emerge when racism and white supremacy interplay with police brutality. The unbridled aggression by the police results from ineffective and insufficient sanctions on police power and authority. The casual murder of Mr. George Floyd by a police officer, filmed by bystanders and security cameras, is the spark that apparently allowed for more citizens to galvanize and echo the cry that “Black Lives Matter.” In response to this, various Muslims and Muslim groups and organizations have come out in support of the Black Lives Matter movement and have attempted to raise their version of awareness.

Data from the Institute for Social Policy and Understanding (ISPU) in 2020 show there is a strong support from the Muslim community towards building coalitions with Black Lives Matter movements, with 65% of Muslim respondents to a nationally representative survey indicating support, more than any other faith group measured. 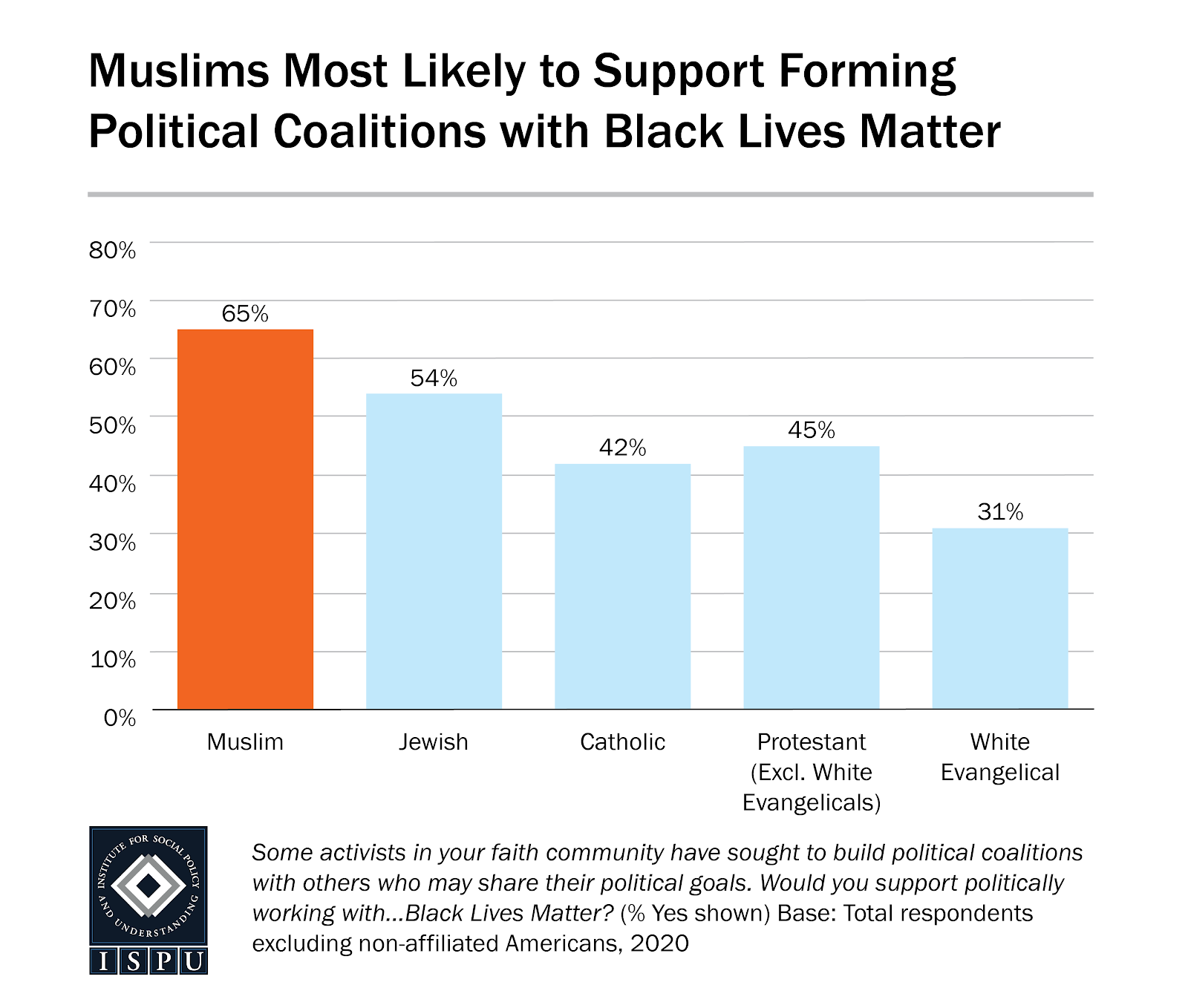 Although another ISPU survey administered in 2017 indicates there is strong Muslim support for the Black Lives Matter movement in general (66%, higher than any faith group measured that year, and the general public), there are questions around how much of this is performative, perfunctory and merely playing to the popular theme of the moment. Black Muslims and Black Americans – in general – have consistently experienced anti-Black treatment at the hands of non-Black Muslims in business, social and religious spaces. In ISPU’s 2017 American Muslim Poll, 33% of Muslims who identify as Black or African American reported experiencing racial discrimination at the hands of another Muslim. Although Black Muslims are more likely to report racial discrimination from outside their faith community (56% vs. 33%), one cannot ignore the issue of intra-Muslim racism, especially since the experience is often far more painful when it comes from a fellow believer.

Since protests began in late May, various non-Black Muslims and non-Black Muslim-led organizations have attempted to speak up and lend their voice to the issue. The Islamic Society of North America (ISNA), the Islamic Circle of North America (ICNA), the Fiqh Council of North America (FCNA) and the Council on American-Islamic Relations (CAIR) are just a few of the organizations that have made statements, hosted events or co-sponsored events to help raise awareness of racism. Muslim organizations have over the years consistently addressed oppression – mainly in other countries. There have been hundreds of rallies and protests against oppression that have occurred in non-White Muslim countries. Additionally, Islam as a theology, calls on us to depise oppression and challenge it. Therefore, it is understandable that non-Black Muslims and non-Black Muslim organizations would eventually see the need to speak out against oppression of minorities in America, and now specifically African American and Black Muslims. But it has taken many generations to get here, even though oppression has been a bedrock of this nation for centuries.

For years, various organizations have hosted or publicized events that do not have Black Muslims on their panels. The line-up changes once the community pushes back. In a number of cases, there is a connection between anti-Black racism and the exclusion of Muslim women, particularly Black Muslim women. The exclusion of Black Muslims from the public and national discourse on the American Muslim experience, is an example of the anti-Black racism that is not interpersonal, but systemic in the Muslim community. This is important to note, because an event is seldom conceived or approved by one individual.

In one example from less than a month ago, two national organizations were prominently featured as co-hosts. We can then safely say that at least two people (we can assume with a fair degree of certainty that it was more) saw the line-up and the final ad for the event and still chose to publicize the event. One of the speakers then chose to decline to participate and recommended an African American Muslim woman replace him on the panel. That multiple Muslims were involved in the planning of this event and approved the final list of speakers while choosing not to correct or be more just in their representation of Islam in America points to this issue of anti-Black racism as not merely being interpersonal, but systemic. This is just one example of many. ISPU data collected in 2017 illustrates that Black Muslims experience a higher rate of intrafaith racial discrimination than non-Black Muslims, with 33% reporting that a fellow believer discriminated against them because of their race in the past year at least once. (Figure 2)

In this past week alone, I have had to personally deal with acts of anti-Black racism while talking about the importance of addressing racism in this country. In one incident, I was invited to be part of a newly formed coalition. Attendees were majority African American Muslims, but there were also non-Black Muslims (white and minorities) scheduled to be in attendance or helping to organize. One non-Black Muslim was effusive in how they communicated with me during the day. However, once I began pushing back on how the event was being organized, their tone shifted to dismissive and rude. I struggled with naming this anti-Black racism because, as a communication scholar, my default is to look at the theory behind why we communicate how we do. So even as we experience it, we still try to find reasons not to believe it.

In a second incident, a number of individuals with religious duties were discussing the topics of engagement for our upcoming meeting. A non-Black Muslim of color indicated that they wanted to discuss another topic in addition to Black Lives Matter and the aftermath of George Floyd’s murder. I responded stating that the way in which the statement was worded was hurtful and represented an erasure of the lived experience of Black individuals in this country. The response was further dismissal and glossing over of the experience, even after other non-Black Muslims attempted to redirect the individual and encourage them to focus on anti-Black racism. The person’s initial response was clearly rooted in anti-Black racism–even if unintentional–as to this moment, it does not seem like the person understands how their initial statement and subsequent responses continue to perpetuate anti-Black racism. In the end, the individual did agree that they will also focus on Black Lives Matter in our next meeting as long as we were willing to focus on other issues in future meetings.

These various types of aggressions against Black Muslims in Muslim spaces continue to place a burden on the Black Muslim community, particularly the African American Muslim community. I am a Black Muslim who has spent over half of my life here in America. However, I also know that as an immigrant, I sometimes experience a different level of privilege as a result of my immigrant status.” It feels like I am seen as different from African American Muslims at times. Anti-Black racism among Muslims is layered, insidious, systemic and interpersonal. The approaches to addressing anti-Black racism and to supporting Black Lives Matter Movement cannot be sporadic or occasional. It will require painful discussions, robust analyses and purposeful action to continue the changes that have gained some momentum in this moment.

There are many who are already doing the work to bring meaningful change and awareness. Non-Black Muslims will need to do more than post hashtags and attend rallies. To address racism, it is important to use valid tools, invite and connect with the appropriate people and support active organizations. Supporting any Black organization is not the approach. There needs to be a seeking out and supporting of organizations, individuals and tools that do or support anti-racism work in our communities.

There are many other resources available that can start or enhance the process of working to combat anti-Black Muslim racism, bolster support for Black Lives Matter initiatives and draw us closer to being a community and nation that truly values each other with equity.