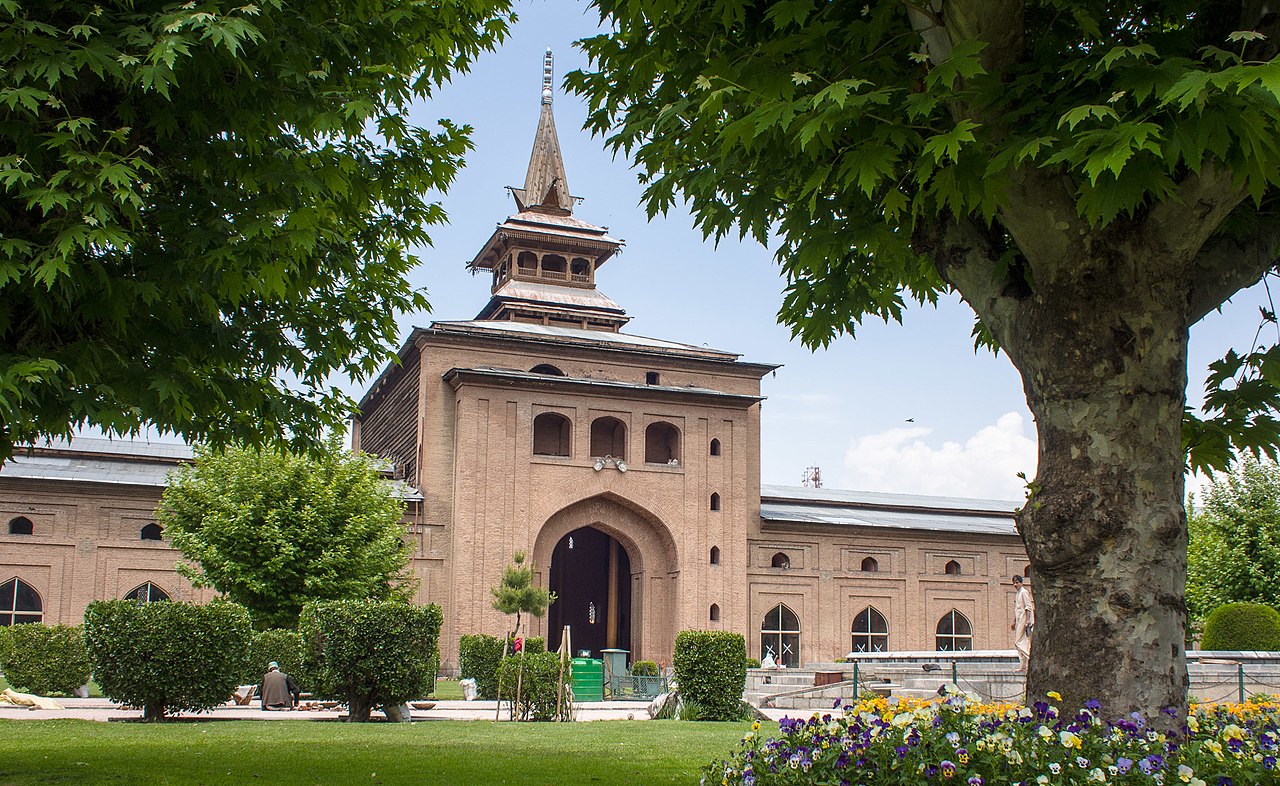 Kashmir, a Muslim majority region, marred with seven decades of conflict and suffering, has twin identities; one described by a famous poet Mahjoor as ‘heaven on the earth,’ while the other Agha poet Shahid Ali addresses it as a “country without a post-office.” Kashmir is equally known through two parallel historical genealogies—one of occupation (Sikhs, Britishers, Dogras/Indians), and the other of Islam and spiritual transformation. The mass conversion of the Kashmir Valley to Islam occurred in the fourteenth century. This was catalyzed by Mir Sayyid Ali Hamadani, a Persian Sufi mystic from Hamadan in western Iran, who visited Kashmir thrice in the 1370s and 1380s accompanied by hundreds of disciples, many of whom settled in Kashmir. After his death, a mosque–the Khanqah-e-Maula–was erected in his honor in the 1390s on the Jhelum River in Srinagar, where it currently stands in a rebuilt eighteenth-century version. 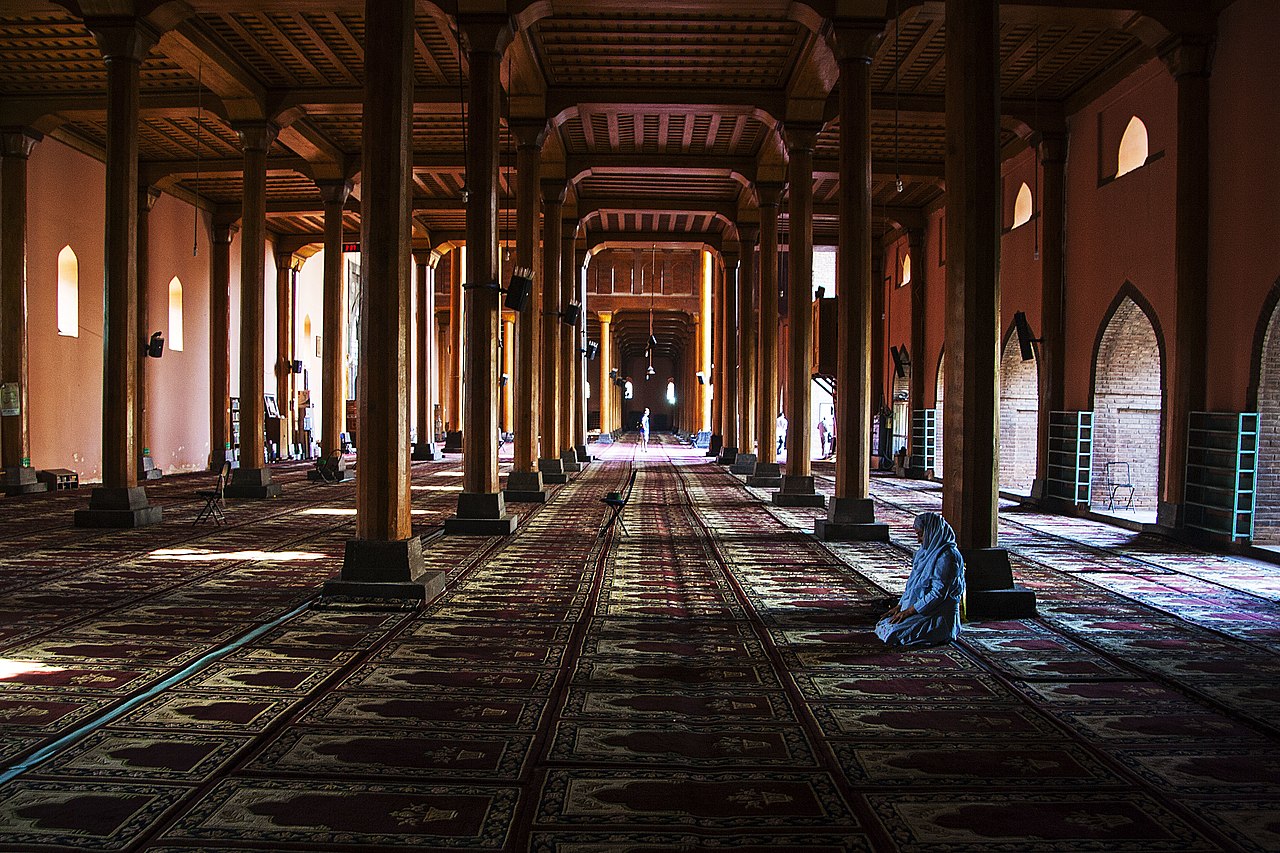 Inside the Jamia Masjid [PC: wikipedia]

Kashmir’s transition to Islam is, however, also identified above all others with a locally born Sufi saint, Sheikh Nooruddin Noorani. He was born around 1377 in a village south of Srinagar and lived until about 1440. Noorani is referred to in the Valley as Alamdar-e-Kashmir (patron saint) and is also known among Muslims and non-Muslims alike by the Sanskrit name Nund Rishi (Nund the Sage). Noorani was greatly influenced by Lalleshwari; a woman mystic of Shaivite Hinduism (which worships the deity Shiva), who lived from about 1320 to 1392. Lalleshwari is known as Lal Ded (Mother) in Kashmir. Lalleshwari is also the founder of the Kashmiri literary tradition. She expressed her spirituality in couplets in Kashmiri, which belongs to the Dardic group of Indo-Aryan languages. Sheikh Noorani, Lal Ded’s follower, was a ‘Muslim Shaivite’ who ‘translated Islam into Kashmir’s [pre-existing] spiritual and cultural idiom’. Noorani’s mausoleum-shrine is located in Charar-e-Sharief, a town about 20 miles south-west of Srinagar.

The specifically Kashmiri version of Islam pioneered by Sheikh Nooruddin Noorani was taken forward in the fifteenth century by Kashmir’s greatest indigenous ruler (sultan) Zain-ul-Abidin, who reigned from about 1423 to 1474. Zain-ul-Abidin foreshadowed the syncretistic policies of India’s greatest Mughal monarch, Akbar, who ruled from 1556 to 1605 and tried to implement an innovative official religion, Din-i-Ilahi – a hybrid of Hinduism and Islam. The version of Islamic faith implanted in Kashmir by Shah Hamdan, Sheikh Noorani/Nund Rishi, and Zain-ul-Abidin, proved enduring and resilient, and defines the everyday practice of Islam in the Valley 600 years later.

Modern man is encountered with an indefectible challenge like never before in human history from the magical spell of secular modernity. The disruption of any link that goes back to metaphysics is the project of secular liberalism. Softly and unconsciously modern condition inspired from secular ontology has cut the cords of the sacred from the life-world of human beings. Collectively, we, the post-enlightenment humans, are now living in a secular-subjective realm which insists on structuring our lives as if God-death-afterlife has no bearing on it. The disruption in the ontological structuration of human Self ceased to be a metaphysical problem for us anymore.

Fasting, as an act, and Ramadan as a moment in time, comes as a disruption to this hegemonic attempt of liberalism to replace the sacred with secular, and metaphysical with the material. In a secular age characterized by the subversion of the ‘sacred’ to the ‘secular’ and a preoccupation with worldliness, fasting represents the subversion of the most manifest and basic features of the ‘secular’: the flesh.

Religion plays an inevitably significant role in the everyday life of Kashmir. With a Muslim majority population, religion has a major influence in the social, psychological and political fabric of the valley, and religious events are seen as a means of connecting to the divine. Ramadan is received with mixed feelings amid the worsening political situation, especially after the 5 August, 2019, with two years of lockdown, over 16,000 people in jails, intermittent encounters, and an impending economic crisis. 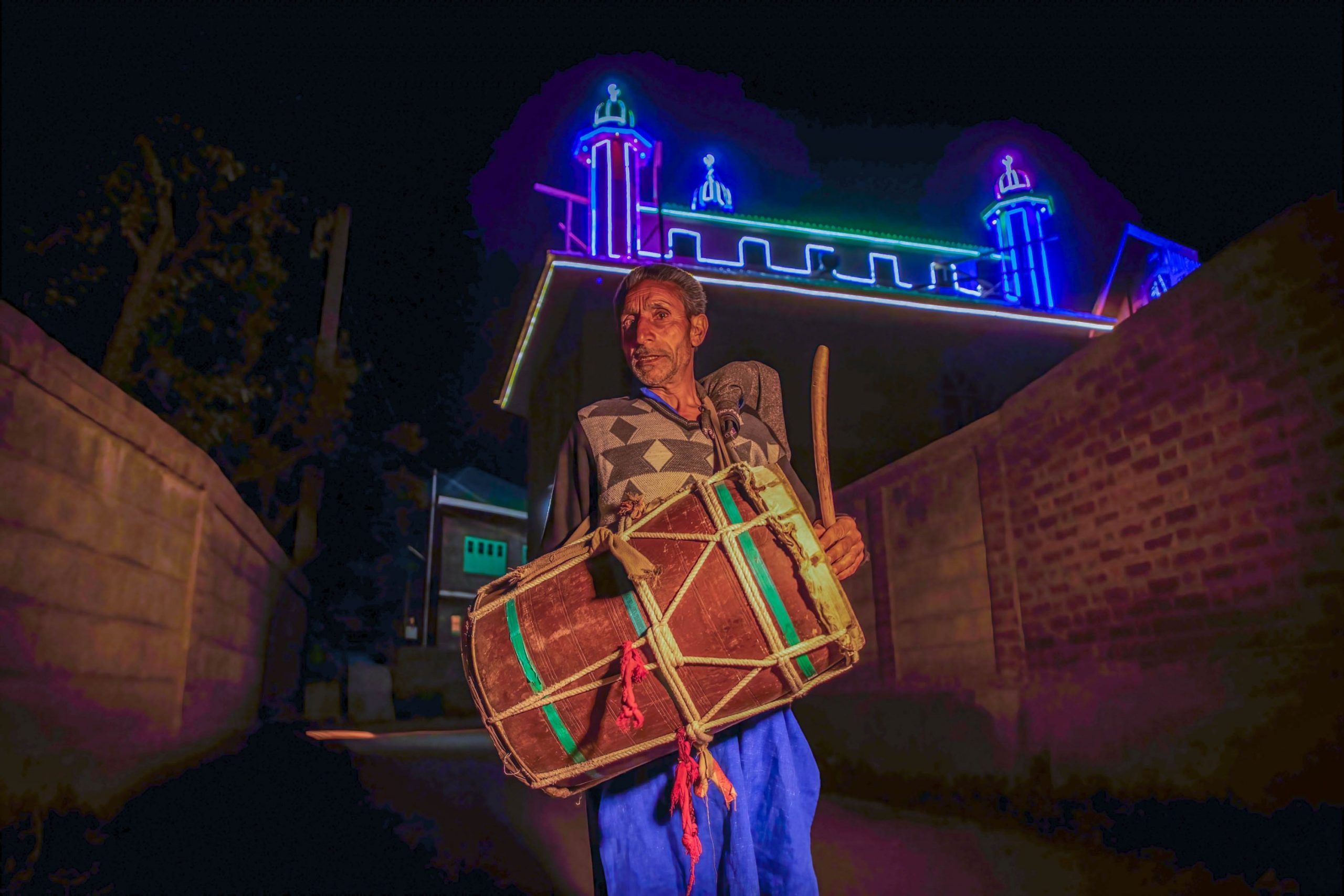 Ali Mohammad, 55, a Kashmiri Ramadan drummer or human alarm, bangs his drum as he walks through the dark alleys in the outskirts of Srinagar, Kashmir on Apr. 10, 2022, alerting Muslim residents to wake up for pre-dawn meals before the start of the following day’s fast during the holy month of Ramadan. (REUTERS)

Kashmiris are circumstantially conditioned to wake up to the alarm of sudden killings and deaths, and the only alarm that comes as normal is the drummer who wakes us up for Suhoor in the month of Ramadan. These are the Sehar Khans–the human alarm clocks for residents of Kashmir–who roam the streets before daylight, beating their drums and diligently reminding Muslims in the Valley to wake up for their pre-dawn mean, or sahar, so that they can brace themselves for hours of fasting ahead during the holy month of Ramadan. But even this practice seems to meet the fate of closure due to the ongoing political turmoil as many are considering stopping this job because of unpredictable political situation in Kashmir.

Prayers, charity, and food, characterize the Muslim-dominated Valley for the month of Ramadan. Streets are lit up in festive colors and mosques reverberate with prayers. After the pre-drawn meal, the air is filled with calls for prayers and scores of people fill up the mosques and shrines dotting the Valley’s landscape. Then, it is business as usual for the working population – except that lunch hour becomes a time for noon prayers.

For Kashmiris who are fasting, iftar–the evening meal with which the Ramzan fast is broken – is a chance to feast on local delicacies such as Babribyol tresh (a drink made of basil seeds), firi’en (made of semolina and milk), qateer (a drink of tragacanth), custards, fruit juices, dates, and dishes made with mutton and chicken. To keep the table ready for iftar, residents start queuing up around noon outside the shops of the kandur, the local bread makers of Kashmir. The kandur take special orders – so visitors can get customized bread made with extra ghee, poppy, and sesame seeds.

Ramadan is cherished in Kashmir like it is in other parts of the world, but it also in no way shares the fate of relative peace like other parts of the Muslim world. Crackdowns, encounters, and funerals are part and parcel of the everyday life of Kashmir. Ramadan is no exception to it. Like, the region’s biggest mosque, Jamia Masjid, remained shut for 30 weeks since the controversial move by New Delhi to strip the disputed Kashmir of its semi-autonomous status in August 2019. The closure of mosques and interfering in the religious practices are received with contempt. This story of anti-Muslim hatred and disruption in religious practices goes way beyond Kashmir. The court ban on Hijab in Karnataka, closure of Tablighi Jamaat Markaz during pandemic, and other similar events only exposes the myth of Indian democracy.

Even under such circumstances, religious practices, including fasting in the month of Ramadan, not only serve the purpose of spiritual elevation, but metaphysical disobedience against the liberal self-centred consumerism and colonialism. Like Palestinians, Ramadan for Kashmiris is not merely a month of seeking nearness to Allah

. It comes as a reminder of being patient and renewing commitment to the cause of seeking justice in the face of oppression. I am reminded of an answer given by a security officer to a Kashmiri journalist, “it may be usual Muslim perception that all good deeds are rewarded in Ramadan so you see more armed rebels getting killed in this month.” Ramadan is indeed the month of supplication and people tend to pray peacefully, but when you witness killing and bloodshed in this month too, you can imagine the plight of the people.

Amid this seemingly never-ending conflict, Kashmiris never forgot the plight of Palestinians nor the suffering of Uyghurs, or the displaced Syrians. Anything I cherish, being a Kashmiri, is the political awareness and concern Kashmiris have for other parts of the Muslim world. While they suffer, they act like the other part of the body, which aches whenever there is an injury in other part of the body. While Kashmiris pray for the peace at home, they equally resonate with the prayers of those who pray for the well-being of the Muslim Ummah.