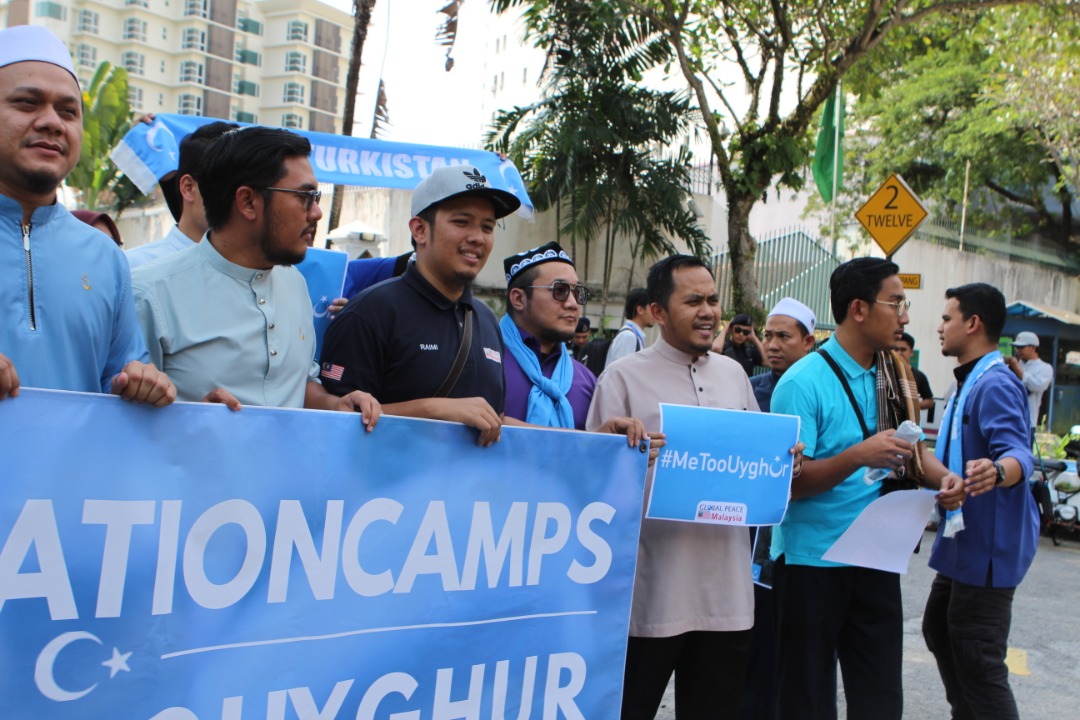 Muslims are standing up for Uyghurs, protests held in Malaysia.

5th of July could be just like another day for people but for Uyghurs, it brings back dark memories of a bloody past. This day, in 2009, thousands of Uyghur students were massacred by Chinese police in Urumqi. These young students were demanding an investigation into the rising number of homicides in a toy factory. These people only wanted justice. They were also upset by the ongoing discrimination in the employment sector. Graduates were denied jobs because of their Uyghur ethnicity. After the protests, China started abducting the Uyghur youth and no one knows where the missing went. Its been 10 years since that horrifying incident and the condition of Muslims have devolved in a genocidal nightmare. 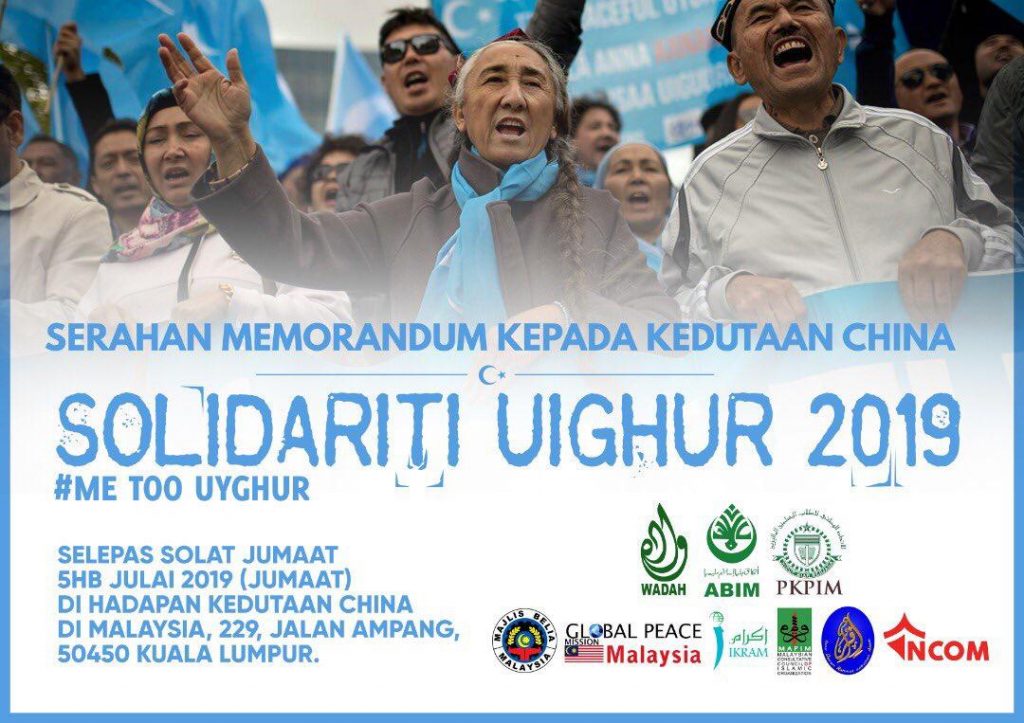 Beijing has now locked over 2 million Uyghurs in concentration camps. People in these places are forced to denounce Islam, forget the teachings of Quran, prohibited from praying, asked to learn Xi Jinping’s speech and tortured for not obeying these orders. Sadly, Islam is being treated as a disease in China and most of the Islamic nations are turning a blind eye to it.

So Malaysia came as a breath of fresh air when Muslim NGOs organized an anti-China protest against Uyghur persecution.

On 5th July 2019, a coalition of 34 Malaysian NGOs gathered outside the Chinese Embassy in Kuala Lumpur to protest the persecution of Uyghurs. The organizations prepared a memo of protest to be submitted to Chinese officials. In the memo, they demanded Beijing to ‘Respect the human rights of the Uyghur people, in particular, their right to life and freedom of religion and belief.’ , ‘immediately stop the persecution and extreme repression of the Uyghur people.’ and close the camps. They also called upon the International community to increase the voices of protest and disfavour upon the Chinese government and to work together to improve the situation for the Uyghur people through concrete actions. 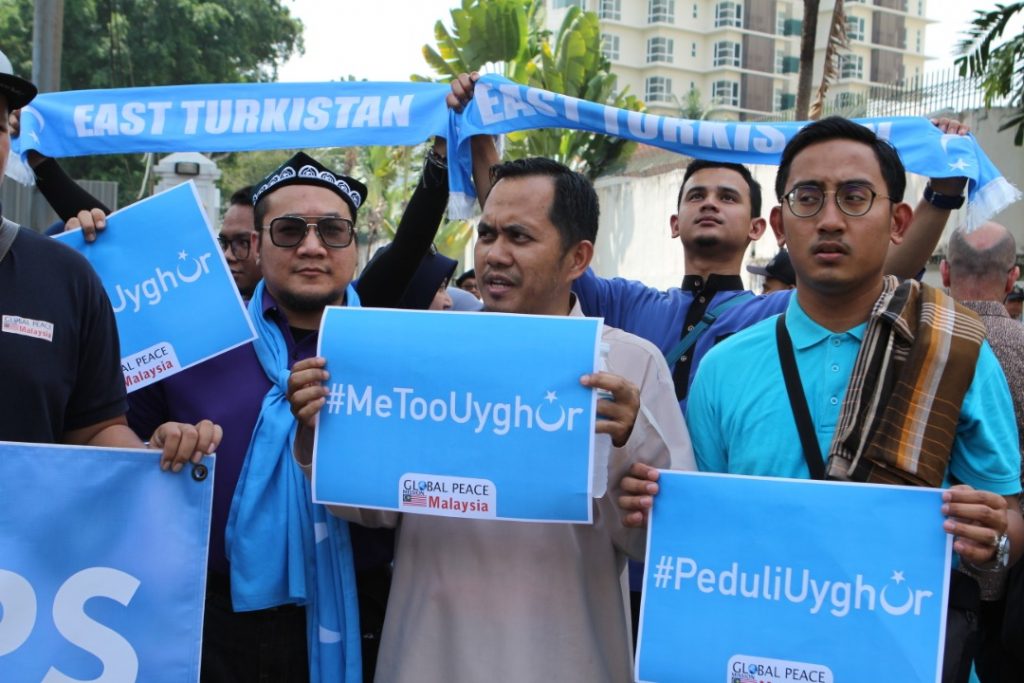 The protesters shouted slogans like ‘Me Too Uyghur’ and ‘Save Uyghur’. In a media interview, president of the Muslim Youth Movement of Malaysia (Abim), Mohamad Raimi Abdul Rahim asked immediate freedom for all those who have been detained in concentration camps.

Abim secretary Muhammad Faisal Abdul Aziz accused the Chinese government of concealing the plight of the Uyghurs by offering NGOs and government agencies free trips and painting a rosy picture of the camps. Mohd Azmi Abdul Hamid, chairman of the Malaysian Consultative Council Of Islamic Organizations (Mapim), said the atrocities committed against the Uyghurs could not be denied or disguised. The Group of NGOs also included Ikram Association and the Malaysian Youth Council among others.

Though no Chinese official came out to accept the memo, the message was clear that now people won’t keep quiet about the Uyghur persecution. There is a dire need for Muslim countries to break their silence on this issue. There is enough evidence to prove that something unholy and inhumane is happening with Uyghurs. If these countries consider China their friend then ask it to stop being a Shaitan. The leaders must realize that their first duty is towards the Ummah and not towards China.

Now is the time to stand for Uyghurs before nothing is left to be saved.

This protest in  Malaysia has proved that people in Muslim countries do support Uyghurs even if their governments are silent and are upset with Beijing’s policies. This event proved that governments may fail to fight but people won’t.

Mindful or Mind-full? Going From AutoPilot to Aware