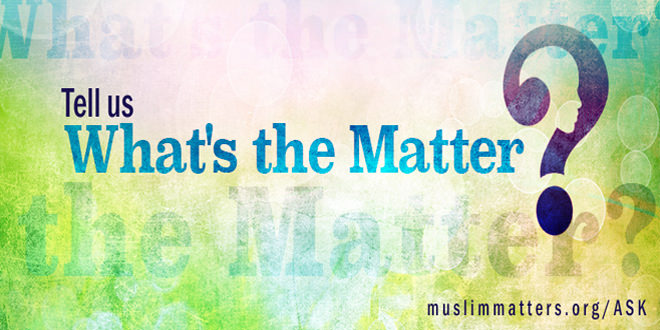 I was the fourth child of my parents; two sisters, 1 brother then myself. My mother did not keep her resentment a secret for me for being a female child. My brother was only a year older than me. She preferred my brother over me in almost all matters from pillows and blankets to meals. She kept feeling insecure for having 3 daughters.

By each passing year, I became more conscious of the fact that I was unwanted. I cried through all my birthdays and kept asking Allah why I was born. My mother once said in front of the whole family how disappointed my parents were when I was born, as a boy should have been born instead of a girl. Even my soul was shattered. By the time I became 10, I was already contemplating suicide.

We used to live on the 6th floor and my dream was to have the courage to push myself from the balcony after leaving a note for my mother.  Whenever I read how the Arabs buried their daughters alive in jahiliyya times, I actually felt happy for those girls as they did not have to go thru humiliation that I had to go thru every single day.

I became rebellious and that made the matters worse. I found solace in the idea that once I get married, I will be peaceful.  I married and stayed back while all my family was settled in US. I made all the sacrifices possible for my marriage. Initially everything was fine and we were happy despite the fact that he had sexual issues and was infertile. Whenever my parents came over, I would be nice to them and serve them but my childhood memories never went away.

After 7 years of my marriage, I started studying Islam at an institute. My love for Islam grew but then so did the trials. I started feeling sick and all of a sudden I could not relate to my husband anymore. This happened overnight and without any reason. That 1 year was very painful. Then I found out that it was black magic to separate husband and wife. When my husband would be away, I would think about him and adorn myself to welcome him with a smile. The moment he would come home, his face would be enough to put me off. He was also very withdrawn and uncaring.  Eventually I found out that there was a girlfriend from before who was still following him. She herself was married and had 3 daughters but still wanted to marry my husband. My husband also started responding to her.

We adopted a baby but the relationship between me and my husband never recovered. I never realized until much later that my husband was into some discreet activities as well. He started bringing one of his girlfriends home. After that he deliberately left his iphone with me when he went overseas for work. When I went thru it, I was totally shocked. To make it short, he was into porn, intimate relationships and he was hitting on every girl no matter how young she was.  I finally decided to leave him after istikhara and came to US to live with my family. I had no choice because I was penniless.

My sisters assured me of their unconditional support. Initially my mother was all happy that I came until she found out way I came. She kept telling me to go back to him even if he is abusive and brings women home. One time I overheard her on the phone telling someone that she doesn’t want me here and that I should go back.

During the last 10 years, I went thru so much and so many people stabbed me in the back but how can a mother do that. I feel as if someone has scratched my childhood wounds again and the blood is oozing out.  Even now if you ask me who hurt me more, my abusive husband or my mother; I wouldn’t think twice before saying it was my mother. Now I cannot go away from her but I don’t want to talk to her, hear her or even look at her. But Allah will never forgive me for this. I want to know how to deal with her since my akhira is at stake. Allah has given me a lot of success in deen but this one aspect of my life is making me miserable.

May Allah reward you for your patience, perseverance and continued taqwa and faith in Him. This horrible mentality of preferring sons over daughters and then torturing daughters physically and emotionally, leaves deep invisible scars affecting the rest of their lives. This is indeed worse than even the times of jahiliyya when daughters were buried at birth. I cannot even imagine the hurt you must have felt when your mother asked you to return to such a horrible and abusive relationship. Moreover, how difficult it must be to experience such feelings of abandonment from your own mother.

to not only meet those needs, but to treat their children with kindness and justice. If we are expected to treat even plants and animals with gentleness, what right do parents have to treat their own daughters so poorly?

Allah does not expect any child, or adult for that matter, to continually engage in a toxic relationship that will hurt them. The only obligation you have is to figure out how to protect yourself from further emotional scars and at the same time interact with your mother in a way that is not disrespectful. What is important to consider, however, is that it will be difficult to learn to interact with her in this manner overnight.

It is natural and deeply ingrained in our human psyche to desire the love and affection of our parents. And to even look for it long after we have already realized that they are not capable of giving it. In phases of anger it is easy to think that you may not have any expectations from her, but these expectations especially of love, approval, acceptance, or even minimal respect are usually subconscious. Your feelings of anger and hurt will only intensify with every interaction until you let go of these expectations.

I highly recommend seeking therapy or counseling to process all the traumatic events in your life. It is only after working through your trauma and grief of never having a mother that is there for you in the way that you need her to be, that you will be able to connect and empathize with her. This will help make it easier to find enough peace in your heart to handle your mother in the manner that you feel is acceptable in the eyes of Allah

Remember that nobody knows and understands your pain better than Allah

; and above all, nobody is more forgiving and loving than Allah

. Rather than expending emotional & physical energy on the guilt you feel, work towards strengthening your relationship with Allah and also asking Him to strengthen your heart, and to change the heart of your mother.

What’s The Matter? | Everyone Else Around Me Has it Together, BUT Me

What’s The Matter? |Troubled Fiancé, Should I Marry Him?

Afshana Haque is currently the executive director of her private practice, Muslim Family Support and conducts face to face and online therapy from Houston, TX. She is also Assistant Professor of Marriage and Family Therapy at the University of Houston-Clear Lake. Afshana received her PhD from St. Mary’s University, San Antonio, TX . She has completed her master’s degree in Marriage and Family Therapy from University of Houston-Clear Lake and has previously worked in various hospitals and institutions including: DePelchin’s Children Center in Houston, TX, Methodist Hospital, and AIGB Diagnostics for a bariatric surgical group in San Anotonio, TX. She was also co-director of a non-profit organization, Hawa Center for Refugee Mental Health, now called the Center for Refugee Services. During her graduate career she had the privilege of being a part of the AAMFT Minority Fellowship Program and was granted over $50,000 in funding. This program provided her with rigorous training in therapy and research with minority families. Afshana has given platform and poster presentations at national and state conferences in her field. She has also presented at the Texas Dawah Convention, ISNA: Islam in America Conference, and was invited to give parenting workshops at ISGH NW Zone and Austin Peace Academy. Afshana’s research interests include exploring the challenges faced by Muslims in the American society, issues with acculturation and assimilation, raising children, incorporating the use of spirituality in family therapy, and most importantly formatting traditional therapy in ways that will be appealing to those who belong to collectivistic cultures in addition to those who view therapy as shameful. Her most recent research publications include: A Systematic Research Synthesis of Various Adaptive Strategies Utilized by Dual-Income Couples, and The Assessment of Marital Adjustment with Muslim Populations: A Reliability study of the Locke-Wallace Marital Adjustment Test when administered to the Muslim Population. She is also an apprentice editor of the Journal of Marital and Family therapy, the highest impact journal in the field of Marriage and Family Therapy.