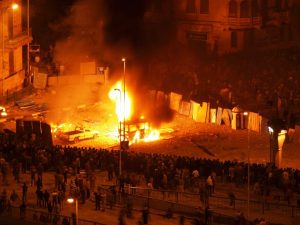 Groups of young activists marched through the streets of Cairo, Alexandria and Ismailia. They were waving placards denouncing Hosni Mubarak and calling for the overthrow of the corrupt political system that had held them in virtual enslavement. They had been building to this point for many years now and had planned long and hard for this moment. Some of them had been arrested, some of them had been tortured and some had been killed – yet they continued to organize. Now, they were out on the streets and their goal was clear – Liberation (Tahrir) Square.

I watched them utilize the internet and social media to organize a revolution and wondered how come all I had managed to do was to waste time on the same sites.

A line of the dreaded secret police stood between the protesters and Tahrir Square. The protesters continued marching towards certain imprisonment and torture. The pace quickened. Within seconds, the protesters were running. They were not just confronting their worst nightmares, they were racing towards it. My mouth was held open in shock. Had they no fear? The crowd broke through the lines of the police like a raging flood breaks through a dam. I did not realize that fear had left them now and it would not be coming back.

I watched them fearless in standing up to the tyrants who prevented them from speaking the truth and wondered what my excuse was when no one was preventing me from standing up for the sake of Allah.

They lined up shoulder to shoulder, feet to feet and turned their face away from those that claim to rule them and towards that of their Lord. The Imam delivers a sermon that is powerful, moving and emotive and no one who was there would forget it. They raised their bloodied and battered bodies towards the only power they answered to. Their Christian brethren formed a human wall to protect them from incoming missiles. Although it had no walls, no minaret and no carpet – that Friday, Tahrir Square was the 4th holiest Mosque in the world of Islam.

I watched them stop and pray to Allah in the midst of a barrage of stones and bullets and wondered why I was pleased with myself for worshiping Allah in only the most limited sense of the word.

It is past midnight. Another molotov cocktail hurtles towards them. As they scramble behind their makeshift tent positions there are huge concrete blocks being hurled at them from the rooftops of neighboring buildings. Shots ring out. They are under assault and no one is doing anything to help them. Their only defense are the rocks and pebbles beneath their feet. Tired, cold, hungry and unarmed – they have given up too much now to just surrender. Many will be injured, some will die, but Tahrir Square will be held tonight – no matter the cost.

I watched them in awe as this battle between the bullets of the oppressors and the courage of the oppressed and wondered how long I could keep ignoring the plight of the Muslims across the world.

I watched them unite together from all backgrounds for a single cause and wondered what prevented me from uniting with all my brothers and sisters here and across the world.

After 18 days of struggle, after hundreds of deaths, after thousands of wounded – the tyrant finally fled. As the news was announced, a large portion of the crowd fell to their knees and thanked Allah. They cried, they celebrated and they smiled.

I watched them jubilant in the streets of Egypt and I realized that Allah only changes the situation of a people who change themselves. I understood that I must begin the change within myself, my family, my community and my Ummah. That evening, the revolution had come to my soul – and there is no turning back.