Less than two weeks ago, we condemned the deaths of hundreds of innocent lives, lives of Muslims, Hindus, Jews and Christians, who were ruthlessly murdered by terrorists in Mumbai. And today, we continue to mourn the unjustifiable bloodshed.

Those of you who follow my writings are quite aware that I am not much of a conspiracy theorist; I tend to believe in facts. I take stories and incidents for what is apparent of them, unless there is some strong and reliable evidence to show otherwise.

Ever since the Mumbai terrorist shootings, all sorts of rumors and conspiracy theories have been flying around in emails. Many centered around the killing of Hemant Karkare, widely praised for his discipline and integrity, who was the chief of the Maharashtra Anti-terrorism squad and who led the investigation into the Sept 29 blast which was later revealed to be the work of Hindutva supporters. Doubts were raised with regards to the suspicious circumstances of his death, and the possibility of him having been targeted for his expose.

Some of the conspiracy emails have been circulated by Muslims, who refuse to believe that fellow Muslims could do such a thing. While I appreciate the sentiment that Muslims “truly” acting upon their religion would not do such a thing, we have to recognize that Muslims don’t always represent or act upon their religion correctly (which is no different from other religions and their adherents); in fact, I would say that Muslims are more often than not, awful representatives of their beautiful religion, which has led some to say that Islam is the best religion with the worst followers! So, the recognition that there are those amongst us who use religion for their vile purposes is an important one. We cannot believe that every Muslim involved in terrorism is planted, or a RAW/MOSSAD/CIA agent. Otherwise, we will never move forward with correction and cure.

Back to the emails: most of the conspiracy emails have actually been circulated by people who are not Muslims, whether they be Indian leftists of Hindu background, Sikhs, or others; an indication of a healthy and vibrant discussion that centers on the crime and not on hype. And while some of the discussions were compelling in terms of the kind of “benefit” that this type of terrorism provides the Hindu extremists in India (esp. the BJP and VHP types), I refused to give them much credibility in light of the apparent and “official” version.

This started to change when this “official” and credible AP news story came through yesterday, which reportsthe arrest of 2 men in Mumbai who provided direct assistance to the terrorists. Normally these arrests would sound like a boon for Indian security agencies. But then the bomb-shell hit: one of the arrested men turns out to be an undercover Kashmiri police officer: 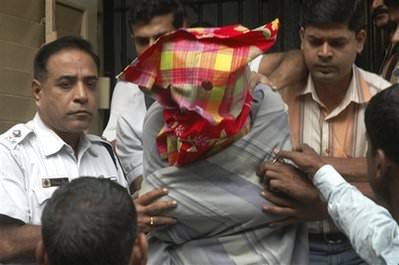 Senior police officers in Indian Kashmir, which has been at the heart of tensions between India and Pakistan, demanded the release of the officer, Mukhtar Ahmed, saying he was one of their own and had been involved in infiltrating Kashmiri militant groups.

Now, let’s rewind a bit to the 9/11 attacks: imagine if a NYPD officer had directly provided phone SIM cards, or some other form of direct assistance to the 9/11 hijackers. Imagine how that story would reverberate and send shock-waves through the entire American security syndicate, and the media would be all over it. But unfortunately, Indian officials and perhaps the media (esp. the Indian media), are so insistent at only one angle to the story, that they are not treating this story for the significant implications it possesses.

Back to the story then, we have to remember that the terrorists heavily relied on cell-phones, and other gadgetry to coordinate their murderous spree.

Once the coordinated attacks began, the terrorists were on their cell phones constantly. They used BlackBerries “to monitor international reaction to the atrocities, and to check on the police response via the internet,” the Courier Mail reports.  [Wired]

Thus, cell-phone capability was a source of direct and significant material support that was provided by an undercover police officer, with perhaps a large axe to grind:

Police said Ahmed [the undercover officer] was recruited to the force after his brother was killed five years ago, allegedly by Lashkar-e-Taiba militants for being a police informer.

This is being denied by another officer, speaking on the condition of anonymity (in the same AP report), who also insists:

“Sometimes we use our men engaged in counterinsurgency ops to provide SIM cards to the (militant) outfits so that we track their plans down,” said the officer.

While that sounds generally like a reasonable counter-insurgency technique, there is a bigger issue here: If indeed the SIM cards were part of counterinsurgency ops to track militant plans down, then how is that Mr. Ahmed, the undercover police officer, missed such a complex and significant operation by terrorists who had SIM cards provided through him?

I believe the AP report raises several questions and further doubts about the entire investigation and whether the ill-trained security forces (as the Indian people and Indian press have been decrying) would be able to thoroughly examine all the ins and outs of this attack and bring the “right” people to full justice for the heinous crimes committed in Mumbai :

The implications of Ahmed’s involvement — that Indian agents may have been in touch with the militants and perhaps supplied the SIM cards used in the attacks — added to the growing list of questions over India’s ill-trained security forces, which are widely blamed for not thwarting the attacks.

My only purpose with this post was to bring to light revelations that have been reported by the credible AP News. It is difficult to blame the skeptics who are no doubt emboldened by this news. While it may be reasonable for these skeptics to raise questions and the “smell” of an inside job, we must always be cautious about any conclusions, especially around complex operations and investigations such as around this attack. Also there is an array of open questions and possibilities about the undercover police officer:

As a Pakistani-American, I do believe that there are rogue and undisciplined actors within Pakistan’s security agencies. But after these revelations, I hope that Indians too will be open to the possibility of rogue and undisciplined actors within India’s security apparatus. If the intention is truly to get to the bottom of the attack, then the only way to do that is to leave prejudicial and biased arguments aside, and focus on the crimes and the trails that led to the crime. And I think most Indians (and the rest of the world) are also interested in a completely transparent investigations. But with so much at stake, a question on the minds of many people will be whether with the anger surrounding the attacks will allow for neutral and fair investigation. We sure hope so.

We also should remember that this police-officer’s involvement does not free the terrorists (and those directly responsible in the planning and training of the attacks) of the responsibility for the many lives they unjustly took. Inside job or not, those who carried out this plan should have had their own conscience and moral grounding to recognize the severe consequence of their actions.

We pray and hope that those responsible and still alive, will be brought back to full justice and given the severest of punishments. And as for those terrorists that died in the rampage, all I can say for them is that they leave with the most wicked of deeds on their scales, after committing one of the gravest sins a Muslim can ever commit (multiple times),as this verse states:

Terrorists on Murderous Rampage in Mumbai: As Muslims, We Condemn it