Check out this bit from the New Haven Independent on Eid Salah for Eid ul-Fitr 1429. The Eid khutbah was delivered by Shaykh Yasir Qadhi!

Muslim Americans from all parts of the world knelt down together in a Yale gymnasium to celebrate the end of Ramadan.“We’ve got everyone!” said Shafiq Abdussabur as he made his way through a crowd of Moroccans, Saudi Arabians, and North Africans.“If you never get a chance to leave the country, all you have to do is come here and you’ll see the whole world.”Coming from their homes in New Haven and surrounding towns, hundreds of Muslim Americans gathered in Yale’s Coxe Cage Tuesday morning for the annual celebration of Eid. In separate men’s and women’s sections, hundreds knelt facing east and offered prayers to close their month of fasting. Eid, one of the most important days in the Islamic calendar, marks the end of the holy month of Ramadan, during which Muslims do not eat or drink during daylight hours.The morning prayers were followed by an address by a local Imam. The festivities then moved to the Masjid Al-Islam mosque on George Street, where a huge outdoor feast was held. The morning was a time for worship, a call for engagement, and a celebration of a diverse community. 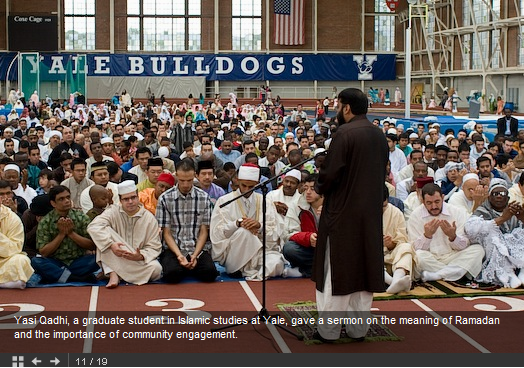 Every One A Messenger

The New Haven Muslim community’s Eid celebration has been held at the Coxe Cage for several years. At 7:45 a.m., when the morning prayers were scheduled to begin, men and women wearing traditional Middle Eastern and North African clothes streamed in through two separate entrances, removing their shoes at the door. In the men’s section, towards the front of the gym, friends greeted each other with hugs and multiple kisses on each cheek, saying, “Assalaamu ‘Aleykum” (“Peace be on you.”)Many unfolded colorful prayer rugs as they knelt on the several large blue tarps laid out in the center of the lofty gymnasium. Children dressed in fancy suits and dresses ran and played on the track.After a delay caused by a faulty sound system, Dr. Mohamed Abdelati led the crowd in morning prayers. Abdelati is the imam of the New Haven Islamic Center in West Haven. The morning prayers were followed by an address by Imam Yasir Qadhi, a graduate student of Islamic Studies at Yale.“Today is the day of Eid!” Qadhi shouted three times. In an enthusiastic sermon, Qadhi expounded on the five pillars of Islam. He then spoke out about the “crisis” of anti-Islamic sentiment in the United States, referencing a new DVD on “Radical Islam” that has recently been sent to homes in battleground states, and the recent chemical attack in a mosque in Ohio.

“What are you going to do in the face of such hatred?” Qadhi asked the audience twice. “If nothing, all of us will suffer.” He told the crowd that they all had a responsibility to serve as ambassadors of Islam in America, to present the best of Islam in this country where “the average person has never met a Muslim.”

“Everyone is a like a small prophet or messenger in this regard,” he said.

After the service, as the crowd swirled around and filed out the doors, Saifuddin Hasaan (pictured) reminisced about the early beginnings of the New Haven area Muslim community. Hasaan, the former Imam of Masjid Al-Islam said that in 1987 he had helped start a masjid (mosque) in Hamden of only eight muslims. “Now we have thousands,” he said happily, looking around the teeming gym.

Hasaan said that the Muslim community in and around New Haven is growing with Muslims from “every country in the world.”

“The feeling is so great,” Hasaan said, in between hugs with friends. “This is one of the greatest feelings.”

“It’s very multicultural,” Imam Qadhi said, rattling off a list of countries represented by the crowd, including Morocco, Egypt and Tunisia. “That’s one of the first things people notice when they come here.”

“This is a joyous moment,” he said. “It’s a wonderful occasion to connect and speak our language.” Almarshad was lingering in the morning sun outside of Coxe Cage, wearing the traditional Saudi Arabian dress, including a red checked keffiyeh.

Around 10 a.m. the party shifted to Masjid Al-Islam on George Street. Tables of food were laid out on opposite ends of the parking lot behind the mosque, offering buffets for the men’s and women’s section. The spread included middle eastern cuisine like falafel and humus, as well as traditional American breakfast foods like muffins and danish pastries. For those gathered, it was the first daytime meal in a month of fasting.

A big inflatable slide and and a bouncy castle were set up for kids to play on.

Moroccan-born New Havener Ababkre Mounir (at right in photo) explained the significance of Ramadan, the month-long fast that ends with Eid. During Ramadan, Muslims do not eat or drink between sunrise and sunset. Mounir explained that the fast is partly about learning to control the body.

“There is a lesson,” he said. “Before you feel hunger, but you cannot. You don’t obey your body. You show your body that you are in control.”

“But it is not punishment,” he added. “It is a celebration.”

“A lot of people cry yesterday because Ramadan is over,” Mounir said. “It is really something that we love.”

Asked about the separation of men and women, Mounir said, “It is a matter of respect.”

“We have our dialogues and they have their dialogues.”

The Eid feast was scheduled to go all day long.