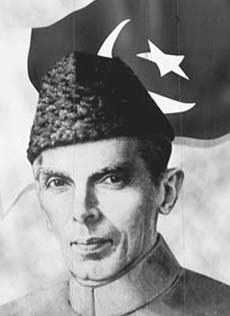 What is the legacy of Pakistan? Pakistan is in the throes of severe and aberrant conflict and the center of world attention at the moment. Stuck in a precarious geographical location with the medal of being a nuclear state around its neck, it has put the US and its allies on edge with its internal strife, its supposed harboring of terrorists and an overall political situation that refuses to be abided. But assessing the situation analytically even if this past decade was taken out of the life of the country, there is still little in its history to prove that things have ever been what could be deemed peaceful or even conducive to the social, economic or political advancements of any country. Education, basic civic amenities, clean water and health is a continuing woe for the vast majority of the 165 million. Why has Pakistan never been able to settle down?

Perhaps this predicament can be put in context with the following hadith: Umar al-Khattab narrates that the Prophet (saw) said, ‘Deeds are [a result] only of the intentions [of the actor] and an individual is rewarded only according to that which he intends. Therefore, whosoever has emigrated for the sake of Allah and His messenger, then his emigration was for Allah and His messenger. Whosoever emigrated for the sake of wordly gain , or a woman [whom he desires] to marry, then his emigration is for the sake of that which [moved him] to emigrates’. In the case of Pakistan, it suffers because the key person responsible for its acquisition, Jinnah never had a Muslim state in mind in the true sense of the word. No doubt he wanted a separate land for the Muslims but according to many historians exploited Islam as the means to gain the end. The niyaat was political gain not religious autonomy; the weapon was religion. Since Islam and Muslims were outwardly proclaimed as the sole reason, though it was not the case, the end result of the act has been jeopardized. In other words Pakistan suffers as a direct fallout of this discrepancy in niyaat.

Jinnah was a modern Muslim and a secularist by every definition that one uses to define the word.

He was a brilliant lawyer with a sharp wit, tongue and an even sharper mind. It is true that he was bothered by racial prejudice but it wasn’t simply the racial prejudice towards the Muslims that irked him but it was inequality of any kind. He did not envision a Muslim state for the Muslims but a separate state where they, and people of all religions for that matter, would have freedom of religion. In his inaugural speech as the first governor general of Pakistan he said, ‘You will find that in the course of time Hindus will cease to be Hindus and Muslims will cease to be Muslims, not in the religious sense because that is the personal faith of each individual, but in the political sense as citizens of the state’. He wanted a democratic state but one in which the ‘church was separated from the state’. He was divided on his views. He had to have the vote of the Muslims to gain this state but did he really wish the new country to be an Islamic country? He talked about an Islamic country but the underlying truth is that he never really intended it. Nothing less than religious fervor could have convinced people to support Jinnah en masse for the creation of Pakistan and the subsequent migration to the new country to constitute what has been called the greatest migration in human history.

If Jinnah was a secularist, it was perhaps in his blood and his family background is of much interest in this milieu. Jinnah was born Mahomedali Jinnahbhai on 25 December, 1876, the eldest of seven children of Mithibai and Jinnabhai Poonja. His father was a prosperous Gujarati merchant who had moved to Sindh from Kathiawar, Gujarat shortly before his birth. Some sources suggest that his ancestors were Hindu Rajputs from Sahiwal, Punjab. Though the family had Hindu, Shia, Ismaili and Sunni ancestry his family was primarily Ismaili. Although he was born a Khoja, disciples of the Ismaili Agha Khan, Jinnah moved toward the Sunni sect early in his life and later evidence given by his relatives and associates establishes that he was firmly a Sunni Muslim.

His first marriage was a traditional one when he was barely sixteen to Emibai who was merely a child. She died a little while after the marriage. The second time around he fell in love with a Parsee girl named Rattanbai or Ruttie Petit around 1916. The daughter of Sir Dinshaw Petit, a successful businessman, she was also known as the ‘flower of Bombay’. Needless to say Dinshaw Petit was furious and refused to consent to the marriage as Jinnah was not only of a different faith but also twice her age. Shortly before the ceremony Ruttie converted to Islam and their only daughter Dina was born in 1919. Dina was the apple of her doting father’s eye until she decided to marry the Parsi born Christian, Neville Wadia. It is also known that when Dina married Neville she was told by Jinnah that ‘she was not his daughter anymore’ and the relationship between the two became strained. Dina had two children, a boy and a girl. Her son Nusli Wadia was born a Christian but converted back to Zoroastrianism and settled in the industrially wealthy Parsi community of Bombay.

Though Jinnah died a Sunni Muslim there is little evidence that would insinuate his connection to Islam to the extent that would suggest that his intention in fighting for Pakistan was for the procurement of an Islamic state. His family background, his lifestyle and everything in between only proposes the presence of disparity between the niyyat and the action. The social and political condition of the country ever since it emerged on the map of the world is evidence enough of this hypothesis. Yes he wanted a state that allowed maximum freedom of religious beliefs and practice and treats all its citizens equally. But this ticket and this promise was not enough to rally the Muslims behind him. He had to push the ‘Islamic Country’ theme and he did that relentlessly. Given the fact that he had the support of millions of Muslims of pre-partition India, it is not too difficult to assume that he had not made his plans very clear to the majority of them. This division of thought, of whether Jinnah envisioned an Islamic state or a secular democratic one, still remains the major bone of contention between the millions in Pakistan today.

Dr. Hassan Askari Rizvi, the former chairman of the Political Science Department of the Punjab University, Lahore writes, ‘Jinnah definitely was a secularist who viewed Islam as an instrument of identity formation and political mobilization for the Muslims of South Asia. Whenever he talked of Islam, he also talked about the modern notion of state, constitutionalism, civil and political rights and equal citizenship irrespective of religion or any other consideration. This means that he was neither for a religious or orthodox Islamic state nor for a secular system in the classical Marxist terms. His view was that Pakistan would be modern, democratic state which derives its ethical formation from Islam’.

Dr. Mubarak Ali, former Chairman of the History Dept. at the Karachi University writes, ‘Jinnah used to be a perfect secularist as far as this private life was concerned, (According to Akbar S. Ahmad nearly every book about Jinnah outsides Pakistan mentions the fact that he drank and some sources even hint at his consumption of pork. Several sources indicate that he gave up alcohol only near the end of his life) yet he believed in using religion for public consumption to achieve his political ends. The propelling slogan during the struggle for Pakistan was to establish a distinct identity of Muslims as a nation. And Jinnah used Islam as a motivating force to rally the Muslims to the cause of Pakistan politically. But the state they aimed to create was to be secular, not a theocracy. And the method to achieve the goals was not a religious movement but political agitation’.

In his concluding speech in Karachi at the All India Muslim League session on Dec. 26, 1943 he said, ‘What is it that keeps the Muslims united as one man, and is the bedrock and sheet-anchor of the community. It is Islam. It is the Great Book, Quran, that is the sheet-anchor of Muslim India. I am sure that as we go on there will be more and more of oneness, one God, one Book, one Prophet and one Nation’. One wonders, being so staunch in his ideas for the new country he was seeking for the Muslims why did he not establish Islamic democracy as the rule right from the very beginning? When affairs are run according to the Quran they are automatically democratic. There is no need to specifically separate religion and democracy as was done with Pakistan. Specially when he said in 1945, ‘Every Mussalman (Muslim) knows that the injunctions of the Holy Quran are not confined to the religious and moral duties. From the Atlantic to the Ganges, says Gibbon, ‘the Holy Quran is acknowledged as the fundamental code, not only of theology, but of civil and criminal jurisprudence, and the laws which regulate the action and the property of mankind are governed by immutable sanctions of the will of God’.

Everyone, except those who are ignorant, knows the Holy Quran is the general code of the Muslims’.

So why wasn’t the Quran made the general code when the founder of the country so staunchly believed in it? Whey weren’t these rules made clear from the beginning when they were stated to be the very reason why this new land was sought? Did the niyyat change after the goal was achieved? Was Islam really just an instrument of power to seek the goal at hand? And is it this grave discrepancy in niyyat that Pakistan has forever remained in an abysmal state of political and social chaos? Samuel Butler said, ‘God cannot alter the past, historians can’. Maybe now when people ask questions like, ‘why is all this happening in Pakistan? We thought it is a Muslim country?’ they can be answered with, ‘It wasn’t meant to be a Muslim country, it was only meant to be a piece of land for the Muslims’.

Pakistan and the Afghan Insurgency: Could More Have Been Done?