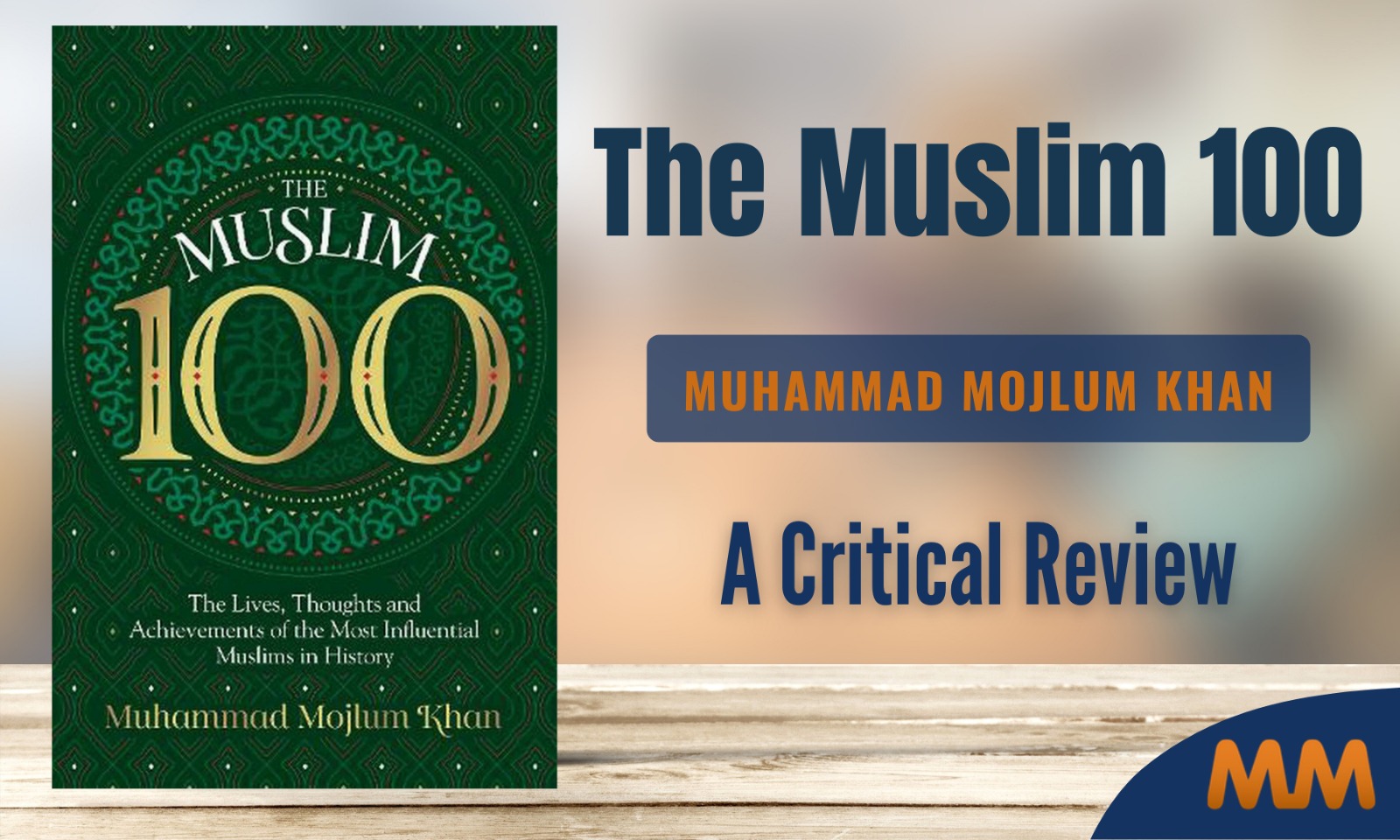 Zainab bint Younus writes a critical review of “The Muslim 100: The Lives, Thoughts and Achievements of the Most Influential Muslims in History,” critiquing it for both, its lack of Muslim women, and the praise of deeply problematic individuals.

Inspirational Muslims… But Not Many Muslimahs

Inspirational Muslims and Muslim heroes throughout history are a popular genre of Muslim books – and rightly so. In a time when we are surrounded by daily reminders of the Ummah’s suffering, it can be hard to remember that we have a rich history of incredible Muslims who did amazing things. Learning about the Muslim scholars, warriors, scientists, artists, poets, and inventors of the past can be a valuable way of connecting with our heritage and also spark inspiration within ourselves to reach those glorious standards.

“The Muslim 100,” by Muhammad Mojlum Khan (Kube Publishing), is one of the latest publications of this genre. When I first heard of it and received it, I was quite excited…until I opened the table of contents. Somehow, in a list of one hundred individuals scattered throughout Islamic history, only four of those names were the names of women – and, predictably, three of them were Khadijah bint Khuwaylid

. On top of that, for Fatimah

, the “most important” thing about them was that each woman was “the perfect wife.” What does that even mean? What is the author’s idea of “the perfect wife” – considering that these two women were extremely different, both in personality or in how they interacted with their husbands? How does them being wives make them influential to the rest of the Ummah?

The fourth name was Rabi’a al-’Adawiyyah – a Sufi saint, whose story is more fantasy than fact. Indeed, by the author’s own admission, there is so little known about her actual life that he felt compelled to share extremely sketchy, near-blasphemous, stories about her that pretty much everyone can acknowledge as fabricated. There was little discussion on why or how she is considered to be so influential, beyond vague references to her spirituality and love for Allah

. While her name is certainly known to Muslims across the world, the blunt truth is that she exists more as a myth than historical fact. This is not to say that the real-life Rabi’a al-Adawiyya was not a pious woman – but that outside of cultural tales and Sufi groups, she does not figure as a woman who influenced the global Ummah on a wider scale.

A Critical Look at Poor Methodology

Perhaps what is most infuriating is the author’s own acknowledgment of critique from others that there are not enough women in this book – and yet, instead of having a discussion into why this is, or exploring his definition and standard of what it means to be “influential,” or examining historical and cultural factors behind the marginalization of women and the minimizing of our stories – he smugly comments, “This book has managed to please people and, at the same time, displease a lot of people! Mission accomplished!”

In one glib statement, Khan made it clear that in his eyes, there have been almost no Muslim women deserving of being considered as “most influential” in history. Alas, this is not an isolated sentiment, either – far too many books, both past and recently published, list only male names as being heroic, inspirational, or influential to the Ummah. There are determined Muslim women who are undertaking the task of writing their own books that focus or include Muslim women in history (here, here, and here). However, all too often, it remains that the Muslim publishers continue to give precedence to authors who disregard Muslim women almost entirely, or include only a few token names (such as Khadijah

In his introduction, the author brings up the important question of “how the nature and extent of each person’s influence” is to be measured – which he answers by claiming that he assessed the nature of their contributions, and evaluated “what was so special or extraordinary about their deeds, actions, and accomplishments.” Yet, even this is not examined in more detail, and his fatal error is in completely ignoring the historical and societal factors behind the exclusion of women’s contributions in history books – including men taking credit for women’s inventions and women being written out of history.

Shaykh Muhammad Akram Nadwi has spoken and written extensively about the loss of knowledge of female Islamic scholarship throughout history, which ended up becoming his motivation for writing the 40-volume encyclopedia of Muslim women involved in hadith scholarship: Al-Muhaddithat. Instead, the author of “The Muslim 100” is perfectly self-satisfied with his selections, with little consideration for any underlying points of academic critique.

The Adoration of Heretics

“This book isn’t about critique of historical methodology!” one could argue. And indeed, it isn’t. Instead, it’s a haphazard collection of biographies of everyone from truly incredible figures of Islamic history such as Umar ibn Abdul Aziz, Imam an-Nawawi, and Imam Fakhr al-Din ar-Razi…to figures as devastating to the Ummah as Mustafa Kemal Ataturk, and blatant heretics such as Al-Hallaj and the self-proclaimed Mahdi of Sudan (along with other influential but deeply problematic figures such as Khomeini of Iran, the poet Umar Khayyam of drunken poetic fame, and the Mughal emperor Akbar, who legalized marriage to Hindu women).

In fact, the author goes out of his way to glorify these extremely problematic figures. Al-Hallaj, for example, was an extreme Sufi who was publicly denounced as a heretic by the scholars of his time (other Sufis, including his own teachers and peers) and subsequently executed. His crime was blasphemy of the worst sort: claiming that he was Allah

. Khan passionately defends al-Hallaj, claiming that “Al-Hallaj became one of the most eloquent and bravest revealers of mystical secrets and truths. Indeed, he not only openly divulged the secrets of Sufism to the masses, but went further and expressed his mystical feelings and experiences in a way that even the uninitiated could understand” [p.337]. The author concludes by justifying his adoration of al-Hallaj’s “mysticism” by quoting – of all people! – a Catholic French academic, whom we are apparently meant to accept as an arbiter of Islamic theology.

In Praise of Ataturk and Al-Ma’mun

Khan’s disturbing love for individuals who deserve the loathing, not the love, of Muslims, includes Mustafa Kemal Ataturk. While waxing lyrical about Ataturk’s political and philosophical career, he utterly dismisses the severity of the man’s damage towards the entire Ummah. Keep in mind that Ataturk was a driving force behind the destruction of the final remnants of the Ottoman caliphate (which itself was wildly imperfect, yet still a symbol of political Islamic force), and subsequently sought to practically wipe out Islam from Turkey. His accomplishments included banning Islamic schools, outlawing the salaam, replacing the Islamic calendar with the Gregorian calendar and the Arabic alphabet with the Latin alphabet (even banning the teaching of Arabic), and expressing such hatred for hijab that he laid the foundation for its banning in Turkish public institutions.

In other words, he despised Islam and all that it stands for, and thirsted to become nothing more than a reflection of godless European secularism. It is difficult to even consider calling Ataturk a Muslim in any way, shape, or form, considering a quote famously attributed to him: “I have no religion, and at times I wish all religions at the bottom of the sea.1https://quotepark.com/quotes/1944546-mustafa-kemal-ataturk-i-have-no-religion-and-at-times-i-wish-all-religi/” And yet, Khan wants us to believe that “He was of course right to carry out the necessary socio-political reforms in order to alleviate mass poverty and illiteracy in Turkey”!

Finally, for the theologically aware, it is further salt on the wound, that Khan expresses near-veneration for the infamous khalifah Abdullah Al-Ma’mun.  Al-Ma’mun is best known for devastating the entire Muslim world by declaring that the Qur’an was created, and punishing all those who objected. Most notably, this included the truly worthy Imam Ahmad ibn Hanbal (rahimahullah), whom he had tortured repeatedly. Yet in Khan’s eyes, “Al-Ma’mun was neither despotic nor tyrannical” [p206], and dismisses the persecution of Imam Ahmad as mere “severe chastisement” and a “strange and inexplicable” [p207] quirk to be glossed over and dismissed.

And while yes, it has been said that Al-Ma’mun repented in the end for his work, it is academic dishonesty at its worst to completely ignore the damage he wreaked in the name of Mu’talizism. It would be funny if not completely disgusting at how Khan has chosen to rewrite history in the favor of figures who had evil and devastating theological and political impacts on the entire Muslim world.

In short, “The Muslim 100” is an example of the kind of Muslim history book no one should waste their money or their time on. It begs the question, who on earth at Kube Publishers approved the reprinting and publishing of this book? Did they simply not read it? Did they not care? Did they have no qualms about promoting content that completely misrepresents the terrible realities of the figures whom the author clearly adores? This issue goes beyond mere oversight: it is gross negligence at best, and active perpetuation of both the exclusion of Muslim women in history, and the glorification of people who should be disparaged and despised for how they negatively impacted the Ummah.

Muslim readers must demand better from our writers and publishers. We cannot expect to have quality material on Islamic history, or indeed on any other topic, without holding those in positions of influence and authority accountable for how they choose to address these subjects. Book reviews should be honest and critical. We should utilize our buying power and actively boycott and warn against those who fail our literary and intellectual history so terribly. In other words: don’t bother buying this book, and let Kube Publishers know exactly why!