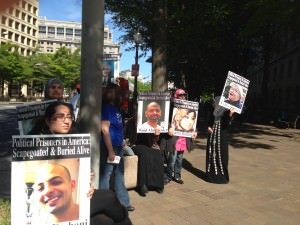 Helplessness and resolve draped in a cream hijab and coral shawl, her face shielded behind over-sized sunglasses, holding her head high, she displays the photograph of the love of her life at a rally in front of the Department of Justice in Washington, D.C.

Sahar Ahmed married a network engineer from a decent Pakistani family. The kind of guy most girls dream about and pray for: good-looking, fun-loving, and well-educated.  Farooque Ahmed, a guy who has now been sentenced to 23 years in federal prison, and is currently being held in a Communications Management Unit (CMU).

Farooque Ahmed immigrated to the United States from Pakistan in 1993, attended college in New York and moved to Northern Virginia in 2005 to work in the telecommunications field.

“I prefer not to talk about the case… I have never had an unmonitored conversation with my husband after his arrest,” she has as many unanswered questions as the rest of the world. However, she believes that her husband, Farooque, was targeted due to his religious beliefs and is a political prisoner of pre-emptive prosecution.

“My local Muslim community, except a very few friends, abandoned us. I felt very disappointed with them,” she says.  Sahar had been a part of a new mothers group which disbanded in the aftermath of the arrest.  She now finds solace in meeting other Muslim families through the National Coalition for the Protection of Civil Freedoms and Project Salaam, who have similar stories. But this misery would rather not have company.

“I had to sell everything; find an alternative place to live.” The family lived in a motel for almost a month after the arrest, and then moved from Virginia to New York.

In a clipped British accent, Sahar hesitantly tells me how she works full-time while her mother-in-law takes care of her son. She works to support herself, her husband, and their young son. “I send him money for seasonal clothes, to be able to communicate with us via emails and phone calls, to purchase additional food items, and to buy books,” says Sahar in a matter of fact tone as, in the background, another family takes the stage to demand justice.

“The way he provided for his family, it’s now my duty to provide for anything he needs. I will not say no to him if he needs anything,” she says.  Sahar carries an aura of corralled energy, not letting her emotions through, not demanding pity, like she is here and a million miles away at the same time.

Ramy Osman is an old friend from the masjid Ahmed attended in New York.  He is at the rally with a big sign that reads: The FBI is good at catching terrorist that they trick into becoming terrorists, in the real world the FBI can’t even catch people they monitor.

“People take the headlines for granted without trying to understand that it is more complicated than that,” says Osman, who lives in Virginia and is part of an organization called Muslims for Liberty.  He thinks many people in the community were scared they would be called terrorist sympathizers and thus abandoned Sahar.

“I have not talked to him [Farooque] about the case or his thought process,” says Osman.

When asked if Farooque could have ever brought anything to fruition if the FBI was not involved in creating this manufactured case, Osman does not think so.

“I understand that it takes months of convincing and planning for this exchange of information,” says Osman.

He thinks an informant befriended Farooque and ‘worked’ on his weaknesses on behalf of the FBI, namely, his short temper and naiveté.   Farooque was targeted after he verbalized unpopular views and showed opposition to foreign policy, both of which were well within his rights to do. Osman theorizes that someone who was a new addition to Farooque’s life, prior to his arrest, was actually sent on a mission to entrap Farooque. “I cannot trust any new [friendships] after an experience like this,” says Osman.

Farooque Ahmed’s mother, slips from gentrified English into Punjabi-tinted Urdu, “I did not know anything; they came to my son’s house and started ransacking everything.” Her eyelashes are wet with tears that have fallen every night as she remembers his jokes, his quirks, and habits.

“He loved, no…loves eating home-cooked food ,” she says, desperately lost in time for a second, still not coming to terms with what happened, while sitting on a bench across the street from the FBI headquarters.

His face was plastered all over the news, even on Pakistani news channels. Friends and family around the world saw the headlines; her family, her parenting indicted in the court of public opinion. “He was angry, could not stand injustice and hated politics, but he never hurt anyone,” says Mrs. Ahmed, shielding her face from the D.C. sun with a poster. “He was a good husband and a good son, and now my son who would not let a fly near him is in a gulag,” she cries as she tries to put the puzzle together.

The CMU permits visitation four hours per month, and no contact, meaning the visitor and inmate are in separate rooms with viewing through a glass window and talking via telephone. All conversations must be in English unless special permission is granted 10 days in advance. This is in contrast to ordinary inmates in ordinary units, where the visitation standard includes unlimited contact on their visitation day, once each week or biweekly. In addition to the already imposed restrictions, CMU prisoners are banned from any physical contact with visiting friends and family, including babies, infants, and minor children. According to the Center for Constitutional Rights, Muslims make up two-thirds of the CMU population.

An article from The Washington Post discusses conditions at the CMU:

Washington lawyer Carmen Hernandez, who represents a CMU inmate and is president-elect of the National Association of Criminal Defense Lawyers, noted that being sent to the unit is not considered a punitive measure by prison officials. As a result, authorities do not have to provide hearings and other procedures that are required when punishments are to be administered.

“They claim it’s not a punitive measure, but when you start restricting access, it certainly would appear to be punitive,” Hernandez said. “If you’re going to restrict people’s liberties beyond what they already are, it ought to be for a good, particularized reason, and there does not appear to be one here.”

“It’s highly suspect that basically all of the people in this program are of Middle Eastern descent,” Kieffer said.

The Arab American Institute further elaborates in an article about CMUs:

Many of the prisoners currently being detained in CMUs have no history of disciplinary problems or communication-related infractions during their incarceration. So what are they guilty of? Being Muslim, apparently. Religious profiling, racism and ignorant fear keep these prisoners isolated.

They were placed in isolation without explanation, with no review or appeals process. In clear contradiction of the Bureau’s policies promoting visitation and contact as important elements of rehabilitation, prisoners are not allowed any physical contact with family members or friends. No hugs for your children, no handshake for your friends. They are permitted just two 15-minute phone conversations per week, less than half the allotment of other prisoners. Letters to and from inmates in CMUs are limited, and they are allowed no interaction with other prisoners. They don’t have the same opportunities to educate themselves or learn a trade so they can become employed and integrated into society when released from prison.

“What am I supposed to do?” Mrs. Ahmed laments. She talks of her young daughter-in-law, “I feel for her; how will she spend the rest of her life?”

“My son keeps me going,” Sahar explains, “He asks to hug his father when we make the trip out to Indiana to see him. It seems unfair that we cannot even sit in the same room as him.”

They visit him when they can, as it is a long trip that costs several thousand dollars.

The bus arranged by the NCPCF and Project Salaam for the families of the incarcerated is ready to leave after the rally. Families bring up face after face, name after name of brothers, sons, husbands whom they call political prisoners and the justice system calls convicted terrorists. Many of these families have been marginalized, emotionally and economically isolated. As they board the bus heading from the Justice Department in D.C., they look like any other group of tourists, but they were here on a mission to ask the red, white, and blue to stand up for justice.

Drone Strikes in Yemen- On Bombing Weddings and Families